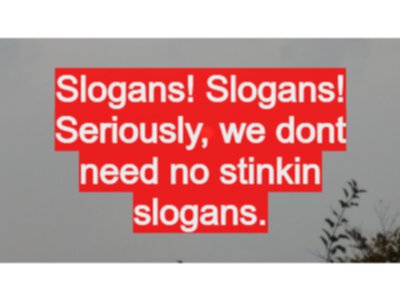 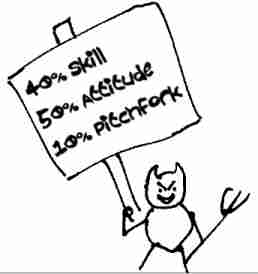 Why do the slogans exist?

And note…I regard this set of reasons as the ‘serious’ set.

If you want to generate your own slogans then take The Evil Tester Sloganizer for a spin.

I take it waaay too seriously at times.

In the past I took it waaaaaaaaay too seriously.

These slogans act as a reminder, to me, to loosen up.

To make sure that I can laugh at myself and my mistakes, so that I can learn from them more quickly.

I still take things seriously. But in a different way than I did before.

“I’m Sure it seems as though I’m Evil.
But it’s only because I care.”

I did that because I cared.

In fact I cared too much.

I cared enough to adopt the identity of a quality policeman.

I cared enough to pursue quality with the same gusto that others pursue “World domination”.

I did do stuff for their own good.

Now I try not to.

Oh dear, I can’t seem to switch my ‘EvilTester Sloganiser’ off!

I do not want to adopt those traits any more.

These slogans remind me not too.

And they have the benefit that they make me laugh… which has the benefit of helping me remember them… and if I ever find myself heading towards that type of state or emotion in my work life then the “EvilTester Sloganiser” kicks in with an EvilTesterism and stops me.

(How does one go about trademarking this stuff, does anyone know?)

When I got into testing it did bug me that people would call ’testing’ a necessary evil. I later learned that those people also thought words like ’thinking’, ‘planning’, and ’learning’ were necessary evils.

I remember scribbling the reversed statement “I’m not necessary. I’m Evil.” during a ‘what is testing’ thinking session.

I added that little ‘spurious’ note into my more ’lofty’ notes on testing because I really wanted to find different ways of doing ’testing’.

Those little notes got me thinking about what else I could do, when I did not have other words to explain it.

And even now the notion of “Eeevil” generates a state, a mindset, a view point, that can help me test that little bit differently very quickly.

A humorous state. A Mischievous state. A sneaky state. A “well what if I just… oops… wasn’t me… quick leg it!” state.

You probably have your own trigger words. Feel free to let me know (in the form of a comment below) what you use as your trigger words.

“I’m just doing WHATEVER it takes.”

Prior to learning the concepts of “Exploratory Testing” or “Context Driven Testing” all I had was the nagging thought that ’there had to exist better ways of doing this stuff’.

And that also contributed to the concept of “Eeevil”.

Diverting from the ‘happy’ path and taking the left hand path.

Leaving the script and going tinkering.

Doing some misdeeds to the system…

“Eeeevil” provides me with a rich set of visual metaphors, and they help me test. I guess some people use the term ’negative’ testing for that - I shall save that debate for a later post.

“Of course I’m not Evil…Do I look Evil?”

I spend a lot of time improving my testing skills, re-assessing my thoughts about testing and incorporating models, approaches and belief systems from other disciplines to help me expand my ‘goodness’ as a tester.

Sadly, the better I became, the more distance grew between me and the ’traditional’, ‘best’, ‘right’ or ‘good’ ways of doing testing.

I had adopted heretical beliefs.

Not all Testers are Evil… Just the good ones

Each of the slogans violate what Alfred Korzybski called the “Is of Identity”. Korzybski wrote a book entitled “Science and Sanity” which presented some of his thoughts on abstraction, generalisation and sanity.

Robin Williams on “Reality…What a Concept” said “You’re only given a little spark of madness. You mustn’t lose it” On the same track of the album, Robin Williams then went on to say “And they haven’t figured out how to tax that yet” (although I think I just paraphrased him).

Anyway, salient advice and words from Mr Williams to keep close to your heart if you don’t have any room for any EvilTesterisms. (TM desired)

Draw your own conclusions.

The slogans are for my benefit not for yours.

Write your own slogans.

If you want to generate your own slogans then take The Evil Tester Sloganizer for a spin.