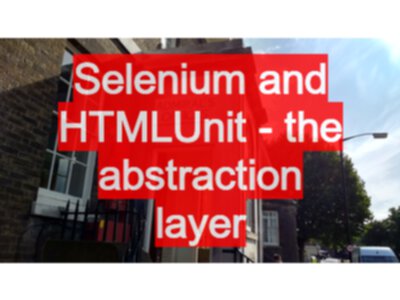 Selenium and HTMLUnit - the abstraction layer 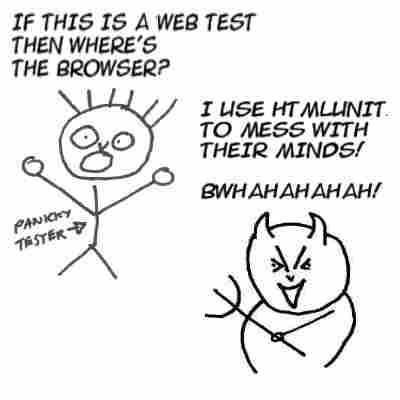 I once did an experiment to see how easy I could wrap HTMLUnit with Selenium for automated software testing.

In my experiment I created a wrapper by extending the DefaultSelenium class and then using eclipse to create wrapper functions for all the methods. Then inject that HTMLUnitSelenium class into my abstraction layer and voila - your Selenium tests run with HTMLUnit (*cough* well, in theory).

Then I recently discovered that someone else had done the same thing. Frank Cohen, at a recent workshop, mentioned a wrapper that already existed in PushToTest.

So I hunted it out, and I tried to use it…

HTMLUnit acts a ‘headless’ browser - a browser without a renderer - which lets you test the functionality of a website without necessarily testing the visual aspects. By having a wrapper I could run tests quickly without having to amend the tests just by creating an HTMLUnit browser.

Where Do I get the wrapper?

I did a Google search and found the original code created by Denali.

Denali passed this code over to PushToTest to productionize, and it now forms part of the PushToTest distribution. So you can either checkout the whole code base from svn:

and build the selenium-tmbranch (the source provides an Ant build file).

Or install push to test and use the selenium-ptt.jar from the lib folder.

Sadly just downloading this and incorporating it into your project doesn’t guarantee a complete instant Selenium wrapper.

If you scan the source then you will see a few “Action not implemented” e.g. openWindow - but if the actions you want to use do exist then you can quickly run your selenium tests against HTMLUnit. Contributing some incomplete methods would seem a really useful way to add back to the open source project.

But you can easily scan your source code and check if any of the ones that you rely on have already undergone some implementation work.

I found that most of the methods that I really needed did have implementations. Those that did not have implementations did not really matter to me because HTMLUnit works slightly differently to Selenium, and I could amend my abstraction layer to compensate.

Every time I ran it I received a missing method exception from Rhino (The Javascript interpreter that HTMLUnit uses). Upon typing the error message into Google I discovered that I had a Rhino conflict from one of the other things in my classpath. So I did what I should have done ages ago and cleared out a whole bunch of extraneous jars that we inherited from the development team.

Quite what caused the conflict I did not find out since I did not take a disciplined approach to removing the items from the classpath - I just wanted the darn thing to start working - I’ll have to go back later and find that out.

We used the DefaultSelenium in our tests at work, so I amended our abstraction layer use:

Rather than add additional code to SeleniumHTMLUnit (because I tried to get something up and running quickly) I changed my abstraction layer to use open instead of openWindow.

I had my tests running quickly, and using HTMLUnit.

HTMLUnit displays more warning messages about your html pages than Selenium does so you can find errors on your site by reading the HTMLUnit logs that you would not find by using Selenium or reading the Selenium logs.

Not Quite The Same Behaviour Out of the Box

Note: see Frank’s comment below for workarounds for my next point.

HTMLUnit as a direct plug-in replacement for Selenium didn’t work straight out of the box in terms of behaviour.

After running my tests using HTMLUnit instead of Selenium - a few more failed than normal, reasons for this:

But Why would you want to do this?

Well, Selenium does run quite slowly. And not all tests really need to run in a ‘real’ browser to add some valuable feedback.

Ideally I would like a subset of basic tests that run on the Continuous Integration server without compromising the integrity of that box by spawning a slew of browsers. Currently we have a set of Hudson slaves and run the test on ‘other’ boxes, or just trigger the tests manually on our local desktops.

Having Selenium tests run quickly on the same server as part of the build seems like a really useful goal to aim for.

Obviously I just spent an couple of hours hacking around but the basic principle of a Selenium HTMLUnit abstraction seems sound - at least to me.

SeleniumHTMLUnit really impressed my since all my tests ran, and that I didn’t have to build this abstraction layer myself (I can score it off my todo list now).

I will definitely add this to my abstraction layer. I will immediately create a testNG group for SeleniumHTMLUnit tests that cover basic page structure and link checking since these run much faster in SeleniumHTMLUnit than Selenium, and these don’t really need to run cross browser as much.

If I have to amend SeleniumHTMLUnit to get my tests working fully then I shall certainly contribute my code to the PushToTest team.

The PushToTest development team, and Denali team, responded really quickly to some out of the blue emails I sent and answered some questions I had and pointing me to the up to date code base.

I have seem plenty of posts from people on forums trying to create an abstraction layer like this - perhaps by contributing to PushToTest as a community we may manage to contribute to the development of a well maintained and full abstraction around Selenium.

Try it out for yourself and get some headless tests going.

<< Book Review: Next Generation Java Testing by Cedric Beust and HaniSuleiman
How to run Selenium-RC in a virtual machine >>