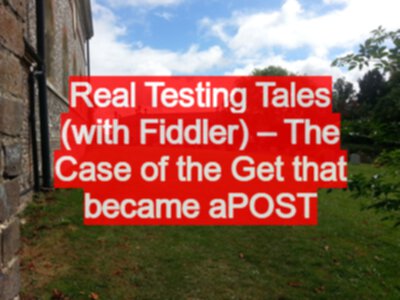 The following contains a true life summary of some recent testing to illustrate the use of Fiddler and some test thinking in action.

I know I have mentioned Fiddler 2 before and how I could not test web sites without it (OK, so I could but I’d use something like BurpSuite instead), but I like Fiddler on Windows because of its ease of use and flexibility, as I will explain…

I recently had cause to examine a Flash application to provide some feedback to the authors.

So I use the application for a while with Fiddler running in the background to see what traffic goes back and forward and see what I find interesting.

I like to watch out for calls to different servers, as this often reveals areas of potential vulnerability, because when swapping between servers, sometimes session or authentication information gets passed in the request, and sometimes you have access to new functionality without authentication.

In this instance I saw calls to a different server so I took the URL from fiddler with the “copy > just URL” function and went directly to this in another browser window to see what I could see.

Since the URL led to a cgi app, I amended the URL to see what the page at the root of the server would tell me.

I did not expect to see a default page with link to the admin functionality, but such things can happen when you build on open-source frameworks – one reason why, as a tester, you need to know and learn about the technologies and frameworks that underpin the application.

So I passed this information on to the developers so they could mitigate this risk.

Nope, same URLs, but this time it POSTed information instead of GETting information.

So in Fiddler I constructed a POST to the admin URL and lo and behold I could see the admin pages again.

In order to assess the impact of this I really wanted a way to browse the admin areas using a normal browser in ‘POST mode’, to see if I could still use the site easily, so I had to find a way to surf the site with POSTs instead of GETs.

I first looked for a Firefox extension to convert all GETs into POSTs but I could not find one. (If anyone knows of one then I would love to learn about it.)

And then I realised that I could probably do that with a customised rule in Fiddler.

If you decide to customise the rules in Fiddler then you really must install the Fiddler2ScriptEditor, it provides a context sensitive, syntax highlighting and documented environment for amending the scripts. I didn’t use this (but I have learned my lesson now) so it took me longer to work out how to do what I wanted.

The Fiddler2ScriptEditor has a class explorer on the RHS with documentation about the various Fiddler API sections. I used to find this a little confusing because the top level item HTTPRequestHeaders actually maps onto “oSession.oRequest.headers.” and not “oSession.oRequest.”, but Eric Laurence (the Fiddler author) kindly responded to an email query of mine and helped me traverse the API.

So armed with the class explorer, the code completion and the Fiddler forums you probably have enough information to help you out .

I have not seen the ease or speed with which you can amend the underlying rule set in Fiddler matched by any other proxy tool.

So, should you ever want to surf the web using POSTs instead of GETs, you need to amend your “function OnBeforeRequest(oSession: Session)” rules to include lines such as:

I could then ‘surf’ the password protected areas of the site with ease by POSTing my requests instead of GETting them, and I could see all the results in a real browser, instead of just the Fiddler inspector windows.

So, queue another sending of information to the developer to mitigate the risk.

I always like to read practical explanations of how people approach testing so feel free to leave comments with examples of your “Real Testing Tales” or links to your blog post examples.