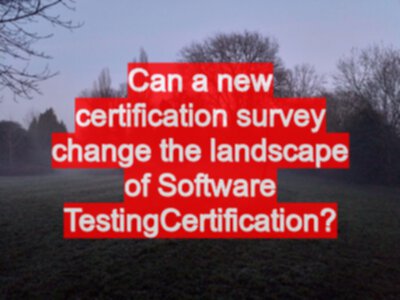 Can a new certification survey change the landscape of Software Testing Certification?

So, can a new certification survey change the landscape of Software Testing Certification? I doubt it, but what the heck. Let’s try.

Inspired I was by Dot Graham’s explanation of the original reasons behind certification in “Certification is evil?”. Which in turn was inspired by the Software Testing Club “Tester is for life, not just for Christmas” e-book.

My views on certification in the e-book were “You’re better off becoming an ordained minister from the Church of the Subgenius for only $30.00 than putting any money, or time, towards the Testing Certification Scam.”

But I only said that because I meant it. I paid my money to the Church of Subgenius and in return received a bumper pack of stuff, including an ordainment certificate (or two). And what a splendidly entertaining pack I got in return. I don’t think people mind being scammed too much when they are in on the joke and it is entertaining and self-referentially irreverent.

And I have a healthy respect for scams and cons throughout history. Many of my historical heroes straddled the fine line between art and artifice: Casanova, Cagliostro, Houdini, Crowley, Machen. My favourite crime author, Jim Thompson, wrote famously about con artists and grifters. I have a fairly large set of circus and magic autobiographies. I’m drawn towards a study of Flim Flam. If there was a degree or certification in Flim Flammery I would want it.

I have come to suspect that all my negative energy towards certification stems from jealousy. I see a sophisticated, and socially acceptable hustle. But one which my chosen beliefs, and approach to life, won’t let me take advantage of.

I can’t think of an equally money spinning, but acceptable to me, scheme. So I get jealous.

But that doesn’t stop me trying.

So, please help me out by taking part in the Evil Tester’s Software Certification Survey.

So, yes, I’m researching the scam of self-certification, because I believe that by involving the person being scammed and colluding with them, but letting them have ultimate responsibility for the scam. We have a win-win grifting situation - and that doesn’t happen very often.

If you are interested in receiving an early release form of a self-certification scheme pack, then let me know and I’m sure for the appropriate monetary remuneration I can knock something up for you.

Dare I draw conclusions from the survey, given some may have viewed it in jest?

So, on with the statistics and numbers. The closest you will come to metrics on this web site.

We asked “Do you hold a Certificate in software testing?”

Proof positive then that the people who replied know what they replied about. I think.

We asked “Did your certification offer value for money?”

Contentious. Some people didn’t think it offered value for money, BUT DIDN’T ASK FOR THEIR MONEY BACK!

Meaning – this could become a profitable business to get into. No-one asks for their money back.

Certification providers take note, you can drop your standards and it won’t make any difference.

We asked “Would you like to self certify yourself in Software Testing?”

It seems as though some people saw through my thinly veiled attempt to see how much appetite exists for self-certification. And 50% think it sounds good. So before the certification crowd jump on this particular bandwagon. This one belongs to me.

We asked “If a self-certification scheme did exist, how much would you pay for the privilege?”

I don’t know what you see from these results, but I see:

Self-certification as a potential goldmine.

We asked “If it did cost money, what would a self-certification scheme pack have to contain so that you felt you were getting value for money?”

At this point I’m giving away the secrets of my future success. Because you too could use the information here to create a money spinning self-certification pack.

Clearly people want to experience a sense of belonging – hence the popularity of the badge and membership card. This may explain why the certification sales pitch based on Social Proof (everyone else does it, why don’t you) does so well.

The direct debit, whilst looking good from a money angle, doesn’t seem that popular, so CAT’s compulsory re-certification scheme might not go down too well with the paying masses. The CAT folk might want to consider changing that aspect of the scheme. But since they didn’t get back to me with previous comments I sent them on their scheme, they might not take any notice of this one either.

So quick wins for all certification providers. Supply a badge and a membership card to boost sales.

We Asked “Do you wish this was a prize survey?”

Clearly people are opinionated. And want to express themselves. And you don’t need a prize to get people to fill in a survey.

In fact. Surveys have shown that if you do give a prize, you can’t trust the results.

Meaning. You can trust the results of this survey all the more.

And lastly, We Asked “Is Software Testing Certification Evil?”

Pretty evenly split there. And maybe people just answered joshingly, but only 22% of our respondents claimed absolutely certainty that certification did not have the “Big E” connotation.

So time for a PR blitz from the certification providers me-thinks. And if any want to pay me for this marketing advice, please get in touch.

Ah, the blooper reel. For as the credits roll, we can partake of the ‘other’ answers.

In terms of cost, there clearly exist people I could milk this scheme for all they had for they threw monetary amounts that no-one in the real world would pay for certification. Almost up to £1000 pounds or more for some people. Quite ridiculous and I’m sure none of the other schemes would charge anywhere close to that.

Some really good ‘stuff I want in the pack’ answers. Which certainly made me want to get one.

And some people saw parts of the page in Dutch which I thought splendid.

So there you have it. Self-certification clearly has legs.

And if you see any certification providers starting to give out Doughnuts on their training courses – you know where they got the idea.