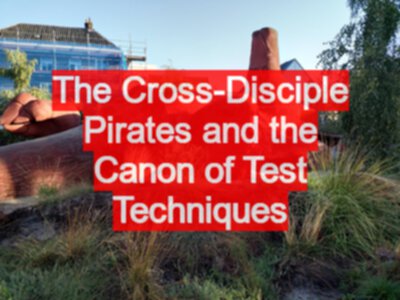 The Cross-Disciple Pirates and the Canon of Test Techniques

I used to consider incorporating techniques from other disciplines into testing as something a little different. It felt right, but since the ‘industry’ didn’t do that, it seemed like a way of individually revealing our personal approach to testing.

But testing has a secret history. The building of the Traditional Testing Canon has remained shrouded in mystery until now. So for all testers following tradition, set yourself free, continue to follow Tradition, just follow the one true one. As I reveal here as “Thee True And Aythentic Historee of Software Testing - A tale of Action and Adventure”.

Consider a Traditional Testing Canon (say each of these in an authoritative voice):

The ‘canon’ will categorise these in different ways – structural, functional, non-functional, etc. But we can ignore all that stuff.

But most of this does not stem from testing.

Suddenly Testing looks like a field set up by pirates. But, clearly since they were on the side of ‘good’ they must have been privateers.

How liberating. Testing as a tale of Action and Adventure.

The field of testing started by looting and pillaging a bunch of other fields to take things that it could apply. And then applied them.

We once terrorised the ocean of intellectual investigation. Studying. Learning. Applying. Simplifying. Nothing was safe from brutal inquiry.

Somehow it got canonised. Standardised. Fixed.

The flow stopped. It got stagnant.

We stopped sailing, we took our ’earnings’ and retired to the Caribbean.

We drank our wine, and rum, and got fat (or at least I did).

We hired out our ships as amusement rides.

Some testers continued to loot and pillage. It just didn’t seem very ‘respectable’.

We should view this as normal.

Indeed, we should have an expectation. Every man-tester, woman-tester, other-tester has a duty to the testing field to Loot, Pillage and Plunder all disciplines of inquiry and knowledge.

Bring back your booty. And tell your tales of adventure.

Testers, embrace your inner pirate. Co-incidentally a tester wrote a book about that kind of thing.