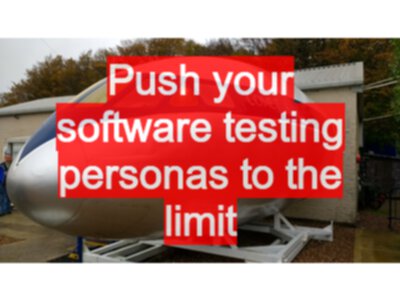 Push your software testing personas to the limit

The notion of personas never really worked for me. “Bob is 35, single and likes kittens…” Blah Blah Blah.

Clearly Bob has all the characteristics of a fictional closet psychopath.

Of course, those are just the most obvious examples of personas we could use in testing.

Well, persona’s have a rock solid history that the UX community don’t seem to promote. So its time to remind ourselves of what we’re really doing.

By looking at the true history of the persona we remind ourselves of techniques that help us build personas more effectively and quickly.

But I warn you now. Persona testing ain’t no walk in the park, princess.

And duly warned, we proceed to the history lesson…

Everyone knows the word Avatar now. Since I haven’t seen the Cameron movie I don’t immediately think of a blue alien animated thing.

I think of an Avatar as a personification. So a persona and Avatar merge and become one and the same.

Which neatly reminds us that the Hindu mythos has an Avatar as an incarnated god.

And that Gods don’t incarnate in just one mythos.

Other mythos offer similar approaches. From the Vodoun, we can take inspiration from the Loa and from the techniques of the Houngan. We could attempt the deliberate summoning of a Loa and the subsequent possession to help us fully manifest a persona as part of our software testing process.

Imagine, in your next morning standup, if you adopt persona techniques in your testing, you could truthfully say:

“This morning I am going to eat raw chillis and cover myself in chilli rum to summon forth Baron Samedi. Much merriment will ensue as I perform some usability testing on the latest release.”

Clearly some of you reading may imagine that I mean this metaphorically. You may imagine my hinting that you should examine the Nanchons of Loa to find inspiration for your personas. Good for you.

The true testers among you will have already begun constructing your Vodoun altar.

Some of you may find your sensibilities more in keeping with a Western Magical tradition. If so, then fear not.

The western magical tradition has a rich set of rituals for the invocation of Gods. Looking up invocation in pretty much any book of ceremonial magic can kick start your use of possessional persona processes.

For those of you without a bent towards the traditional. Modern magic has taken the use of invocation ever further by drawing down fictional Godheads. As exemplified in Phil Hine’s Pseudonomicon, harnessing the Lovecraftian realm.

And I could go on, and on. Clearly I’ve barely scratched the surface of inspirational sources for your persona testing.

It would be inconscionable of me to leave you with a warning from the Pseudonomicon itself, which because of the power of reverse psychology will probably do exactly nothing of the sort:

“working with the Cthulhu Mythos is dangerous due to the high risk of obsession, personality disintegration or infestation by parasitic shells”

Treat the use of Personas in Software Testing with care.