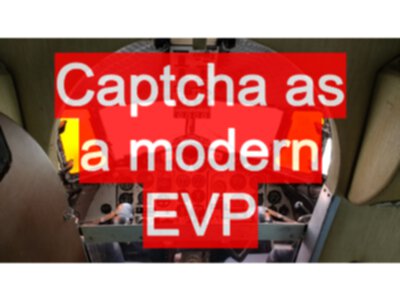 Captcha as a modern EVP

The last time I had to test a Captcha I found it very difficult.

A win win situation for the technology team and the business team.

Recently, I tried to contact a company to buy their software, and like all companies they only want to answer queries from humans and not robots. Clearly robots would try to take over the world and make the entire human race subservient if they could get their evil metallic hands on the kind of software I buy. So such safeguards are required.

Sadly I, as a human, found that I might actually have some robotic blood somewhere in my lineage as I could not answer the Captcha. Some of it rendered out of the image, some of it (most of it) was a garbled jumble of pixels, that I’m pretty sure a genetic algorithm based pattern recognition system could have handled better than my brain.

I had not used the audio part of a Captcha before, so I gave it a try, thinking it might be easier.

Nope, not easier for me.

No one would believe me if I made this stuff up. Lucky I gather evidence…

Warning the above video contains loud and spooky noises. (hmm, I should probably place the warning before the video, oh well, too late now)

And it struck me, that Captcha, when implemented as above, could be used as a supplement for EVP (Electronic Voice Phenomena).

EVP has been around for a long time, but hit the mainstream consciousness in the movie White Noise.

EVP to the skeptic seems like something where you listen to sound and free associate, and try to identify words. Much like hearing satanic messages when playing records backwards. And humans are really good at this. In fact, we love doing this stuff.

Try it. You love it, you know you do. Go crazy. Indulge yourself. Listen to some backmasking now, or some reverse speech.

We can make meaning out of the most useless and random junk.