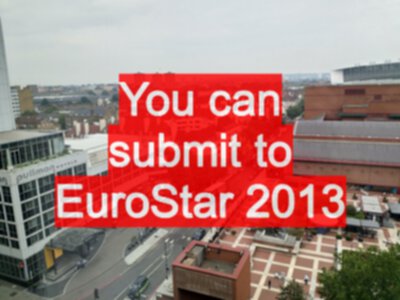 You can submit to Conferences

Conferences publish call for submissions. You should answer that call and submit a presentation.

NOTE: This was originally written to promote a specific conference, I have amended it to be more generic.

But I don’t want to see you submit any old rubbish.

I want you to open up your soul, and make it impossible for me to say anything other than “yes” to you when you submit.

Make it so that the program committee want to vociferously campaign on your behalf to have you attend the conference, so that you can tell other people, about the experience that you will write about, in the proposal that you will submit.

First the obvious, but important.

And then, the secret step: if you want me to back you tenaciously with every ounce of persuasive power that I have.

If they seem daunting, then let me tell you another secret.

Most people will not do this.

Specifically, they will not talk from the heart about their experiences and lessons they learned

I will write some other posts on the topics of submitting and speaking at conferences because I know that the first few times seem daunting. But for the moment, because I want you to get started right away, since you have to submit by early February, I will say this to you… do not use any of the following excuses:

I spoke to a lot of people at EuroStar 2012 and asked them if they would submit at 2013 and I heard a lot of the above excuses.

I know you have something to offer. You just have to find it.

I covered this somewhat in the talk I gave at EuroStar 2012 - specifically covering this point in the paper, so read the paper (I condensed it to make it a super fast read).

And let the theme help you.

The theme “Questioning Testing” lends itself to reinterpretation so start by reinterpreting the theme and then:

One final point, because I want you to get started on your submission now.

So when you submit, do that.

<< What FREE Selenium WebDriver Webinars would you like to watch?
Are you using dependency management yet? >>