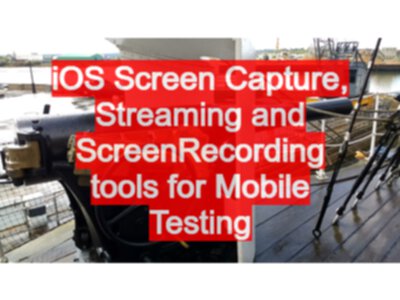 I listed the results of my investigation into Android Screen Capture, Streaming and ScreenRecording tools for Mobile Testing, now time to turn to iOS.

Note that I’m not really covering static screen capture here, since short cuts are built into each operating system for static capture.

iOS is pretty locked down. And without jail breaking, your options are limited.

However, iOS has a built in screen sharing capability called AirPlay, designed to be used for streaming to your Apple TV. But that hasn’t stopped some enterprising developers building AirPlay servers for both Windows and Mac OS computers.

Both applications are easy to use and offer much the same capability, so which you choose will depend on your evaluation on the machines you use.

Both are insanely affordable. And both have a version for Windows and Mac OS.

Reflector offers a trial where you can star as many sessions as you want. But each session only lasts for 10 minutes.

To capture your on-iOS-testing, ‘airplay’ the iOS screen to your desktop or laptop computer, and then use a screen recording tool like Camtasia, BB Flashback (or its big brother BB Test Assistant) and capture the screen movies there.

This doesn’t let you interact with the actual iOS device from your computer, but goes some way to making your testing recordable and reportable.

<< FAQ: How do your books "integrate" with your courses?
How to use Jira to subjectively track and report daily on your testing? >>