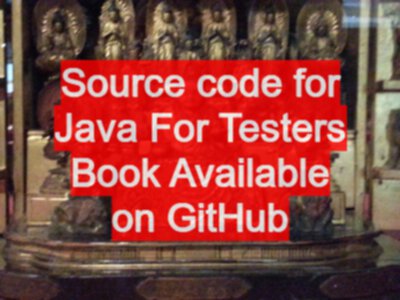 Source code for Java For Testers Book Available on GitHub

I knocked off one thing on my todo list:

You can find it over on github:

It will still change

The source code is likely to change in a number of ways:

This is the code in the book

I made a decision when I finished Selenium Simplified that I would never write another book with code in it, unless I had a way of ‘pulling’ the code out of my main code base, so that I would never have any more copy and paste, or find and replace, editing errors.

So I wrote a macro parser which scans my source code, extracts snippets to text files, and I include the text files in the book.

This means the code in the book is taken directly from the working code base.

I didn’t want to release that code to the world as it isn’t particularly readable since it has a whole bunch of nested macros in it.

And that was why I haven’t released the source code until now.

I expanded my macro processor to kick out a version of the code base without the macros, and that is what I have released to github.

Posted by Alan Richardson Jun 13, 2014 - in About the book Java For Testers

<< Upgrading Selenium WebDriver from v 2.40.0 to 2.42.2
An Odd Approach for Browser Specific Tests for WebDriver >>