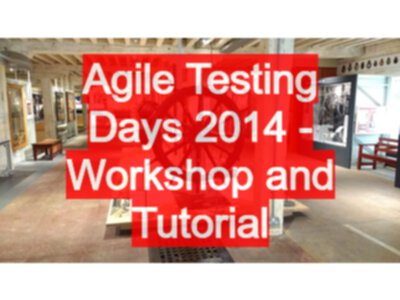 At Agile Testing Days 2014, I presented a full day workshop on “Technical Testing” in Agile and was part of the Black Ops Testing Workshop with Steve Green and Tony Bruce.

Note: there are limited spaces left on our
Black Ops Testing Full Day tutorial
in London in January 2015

Both of these were hands on events.

In the tutorial I present examples of Technical Testing, and how to integrate Technical Testing into Agile, the participants also test a real live application and apply the techniques, mindsets and tools that I describe.

Since it describe Technical Testing in an Agile system, we also spent time discussing the injection points for the technical testing process and thought processes.

The Black Ops Testing workshop took a similar approach but with less ‘talking’ since it was a much shorter time period with more people.

We started with a 5 minute lightning talk from myself, Tony, and Steve. During this we emphasized something important that we hoped the participants would focus on during their testing. We then let the participants loose on the system as we mingled. We coached, asked questions and observed. Then during the debrief we extemporize on our observations and ask questions about what we saw to pull out the insights from the participants. We repeat this process over the session.

Both the Black Ops Testing Workshop and my Tutorial used Redmine as the application under test.

We picked Redmine for a number of reasons, and I’ll list some below:

There are some words in there you might notice “easy to install”, “deployed easily”.

Wouldn’t it be great if all the apps we had to test were easy to install and configure and gain access to?

Yes it would. And as testers, when we work on projects, we can stress this to the project team, or work on it ourselves so that we don’t spend a lot of time messing about with environments.

I used bitnami and their dashboard to automatically deploy and configure the environment. Tony used the amazon aws marketplace and worked with their dashboard. James Lyndsay helped us out, and went all old school, and deployed the base install to the machine.

I learned from this, that my exploratory note taking approach has permeated all my work. As I was installing the environment and configuring it, I made notes of ‘what’ I wanted to do, ‘where’ I was finding the information I needed, ‘how’ to do the steps I took, what data I was using (usernames, passwords, environment names, etc.). And when I needed to repeat the installation (I installed to a VM in Windows, on Mac, and in the cloud), I had all my notes from the previous installations.

When something went wrong in the environment, and I didn’t have access to the parts of the system I needed, I was able to look through my notes and I could see that there were activities I had not performed. I thought I had, but my notes don’t lie to me as much as my memory does.

It should come as no surprise to you then, that I stress note taking in my tutorial, and in the Black Ops Testing Workshop.