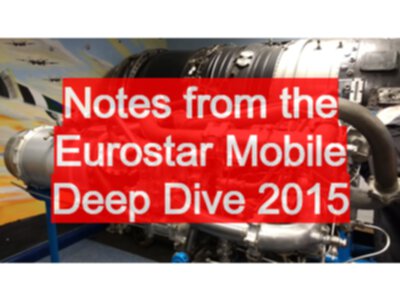 I visited Eurostar 2015 and popped in to a few sessions, but was mainly there for the Mobile Deep Dive.

Alan Page started with an opening keynote on using instrumentation at the AOSP level to provide usage and defect information automatically for an emulation layer that Microsoft had been working on. He also mentioned that his team aims for “More value. Better Quality. Every week” which sounds like a perfectly splendid goal to remind yourself of every morning, and revisit every evening to reflect on how you are doing.

Julian Harty’s talk built on this with an in-depth exploration of how much analytics can be used to help the testing process. I particularly liked the example where a study had examined the ‘phones used by the people most likely to leave a review’ on the app store, and then use those phones as the subset of devices for your on device testing.

Karen Johnson asked (and I’m paraphrasing from memory rather than a written quote) “do you analyse this as a human or a machine? Or both?” Only about 3 of us put our hands up to both. Karen provided a walk through of an example thought process for approaching the scenario and condition creation of constructing an automated walkthrough of a mobile app she had worked on. Karen also reminded us that systems change, so the automated solutions we create will also change and to not get hung up on permanence of an artefact and to remove it when it ceases to add value.

I popped in to the Wearables talk by Marc Van’t Veer and saw him using IOS to Quicktime streaming for capturing the camera from his iOS device to take pictures of testing on his smart watch. Also using Mobizen to stream the display of his device on to a desktop for realtime screen capture. Always good to see people using technological workarounds to improve their testing.

Jeff Payne provided the funniest talk of the deep dive conference which was also filled with valuable information. I made notes that I need to learn how to examine the memory of a running mobile phone, and examine the temporary files, cache files and databases on the phone itself.

Jeff’s quote “Test where easiest and most effective” struck a chord since it also relates to knowing where you are going to get the most benefit from testing a risk because you understand where and how you can test it, rather than just testing on every device.

I found this day a useful addition to the Eurostar Conference and was fortunate to have a whole series of good discussions during the day, and in the evening.

Oh, and I presented as well ‘Risks, Issues and Experiences of Technical Testing on Mobile’. [slides]. The basic takeaways were:

Zeger created a sketchnote during the talk, but I think I made his life difficult by talking fast and cramming in a lot of material

<< Using FindBugs, CheckStyle and PMD from IntelliJ with QAplug to improve your Java Coding
Slides and notes for Eurostar Mobile Deep Dive are available >>