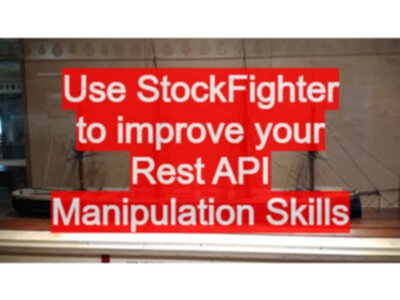 Use StockFighter to improve your Rest API Manipulation Skills

I found a link to StockFighter in my news feed this morning.

It is a free to play game which has a GUI and a Rest API.

I’ve been working on a game of my own: a Mud with a GUI and Rest API, to use when I train people in technical web testing. And it is good to see other ‘fun’ activities which we can use to improve our skills.

I completed the first two levels using PostMan, and I’m going to drop down to some Java for the next level.

One interesting aspect of this game is that because other people are playing it, they are releasing the abstraction layers they are writing on github. So before you start coding you can read their code and learn from that first. A good way to see differing approaches to the problem and modelling that you might not have thought of.

The StockFighter forum has a list of Api libraries in a variety of languages that you can peruse.

I don’t think that my game will end up in as polished a form as the StockFighters game, but I’ve had a few people playtest it so far, and they had fun trying to steal the treasure around them before the other players did, all the while learning more about DOM and URL manipulation.

I’ll be playing around with StockFighter a little more when I have time over the week, which might mean that I won’t finish Front Mission Evolved on the Xbox 360 this week.

RestAssured Tips for Proxies and Logging

How to Create Fluent Page Objects

What are my next steps after writing my first Selenium WebDriver test?

Why Does Selenium Not Work With This Alert?