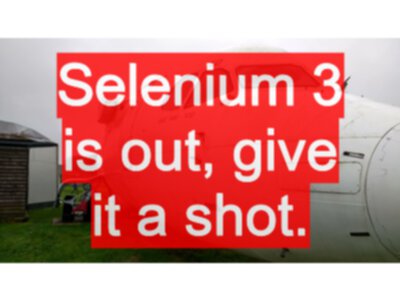 Selenium 3 is out, give it a shot.

Selenium 3.0.1 has been released. There was even an official announcement of version 3.

No doubt you’ve been putting off investigating Selenium 3 because its been in Beta for a while.

I think you should probably investigate now

The changes I had to make to use version 3 were minimal.

I’ve written up the steps you need to take

To make it easy for you, I’ve described the process and steps I took in blog posts, on a slide deck, and in a video.

And Even A Video

The changes you have to make are minimal, so it won’t take long to back it out if your test code doesn’t work.

<< Q: Should you use Selenium 3? A: Probably. I have.
How to create and release a jar to maven central >>