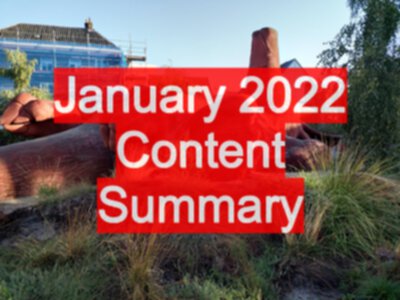 All the monthly summaries are in their own category if you want to browse (and the summaries index here).

I use Faker.js in my Test Data Generator and Table Editor. Faker has now been forked for ongoing maintenance.

I also learned about Falso, another test data generation library from this blog post Meet Falso: The Replacement for Faker.js

I’ve been learning Python and created a couple of simple apps to support my marketing activities. The apps all use Streamlit to create a simple GUI and make them public with the free app hosting from Streamlit.

I wrote a blog post about using Python for adhoc tooling.

I’ve now written a couple of posts on Free Code Camp and the first of those was published in January:

If you are looking for any Test Apps to Practice testing then I have a lot online. I think most are listed on my tools page. And I was reminded of this TODO App I wrote during a Twitter conversation.

There is a Twitter thread with other testing apps listed here. I mention my Triangle App which I have been exploring as posts on Patreon.

This Prince of Persia clone, written in JavaScript was interesting to play and read the code. What I also like about it is the use of url parameters to configure the start position and various params e.g. lives, time left.

I replied to a message posted by Simon Stewart for a list of books people have written. And rather than my testing books I referred him to my book of Rhyming Verse Suitable for Children (and other people) called “There Are Hats”. Poems and Illustrations that are of the most splendid variety.

The Triangle domain is a richer domain than the requirements suggest. Some notes and testing decisions.

A first pass through thinking of ‘X based testing’ exercises for the triangle problem.

Expectations are generated by humans. How far could we automate this?

Investigating an api made easy by the postman link on the api docs page.

Some tactical automating in Python.

An example of using Streamlit to make a Python script into a free hosted cloud application.

The recent hullabaloo around faker.js caused me to think about unexpected version changes.

Updated the test tool hub to work with current versions of Java.

The Triangle Problem is a ‘classic’ in Software Testing. Useful to revisit.

An apperception is more than just what is picked up by the sense organs.

<< A beginner's guide to software testing - Claims, and Expectations.
Use Leaderboards and Counts as Triggers and Trends, not for Motivation >>