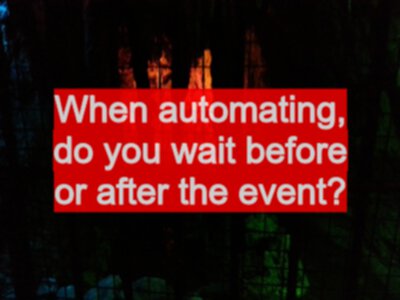 When automating, do you wait before or after the event?

As I worked on the code for my “migrating to selenium 2.0” workshop at Tony Bruce’s Skills Matter event recently. One of my automation challenges involved waiting for an element to have clickability. It existed in the DOM, visible, and all other rendered event style isCondition()s. But when clicked on, it could not respond to events.

For a reason of bias, I spent far too many minutes banging my head against the automation wall. My brain insisted on trying to fix the problem at the point my code encountered it, i.e. when trying to click on it in the Page Object.

I solved the automation issue by waiting, at the point my code puts the system into the state of unclickability, and waiting until it re-enters a state of clickability.

// This is the wait I needed in the code above, but it only made sense here

// do not consider it open or closed until the menu stops growing,

I found it interesting that I defaulted to the first style, and I don’t think I’ve used the second style as much.

You can imagine more trade-offs associated with each style:

For some reason my approach to automation defaulted to the first style.

This post should act as a reminder to consider both styles, and maybe I won’t get stuck too long on a synchronisation problem again.

Posted by Alan Richardson May 24, 2011 - in Selenium Simplified Blog WebDriver

<< Tutorial on Burp Suite Repeater and Intruder
Use Real Words to Communicate, Not Testing Phrases >>