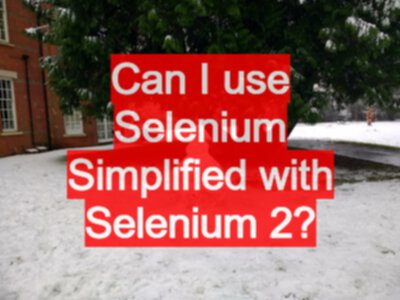 Can I use Selenium Simplified with Selenium 2?

Selenium has changed since I wrote Selenium Simplified.

Selenium Simplified targets the Selenium 1.0 API. This has not changed in Selenium 2.0

Selenium 2.0 bundles together the Selenium 1.0 server and API and the WebDriver code base.

I recently checked how compatible Selenium Simplified was with Selenium 2.0.0 and was pleasantly surprised.

Oh, and it works really well. You don’t have to change very much at all. Once you understand what to download, and how to use the correct jar versions in your build path and ant files, you will be fine.

I’ve structured this blog post so that it maps on to the structure of the book.

The Selenium IDE lets you create HTML suites and save them to html files so we don’t need to create these by hand any more.

Simply add the tests to the side of the ide and save as html.

Then you can run them with -htmlunit as described in the text.

On page 24 there is a big warning saying do not use the -htmlunit to run selenese test suites.

I don’t recommend it as a good approach as I think you should move to coding your tests, but if you want to then you should be able to do this in Selenium 2.0.0 much more consistently than in 1.0.3

Since everything works with Selenium 2.0.0 and Selenium 2.0.0 handles the most up to date versions of the browsers you are using, you should probably use this.

If you want to use Selenium 2.0.0 then the jars you need to add to your build paths and ant files is:

Then, any place in the text that talks about:

I ran through all the tests and all I did was change the jars that the project used. I used the 2.0.0 jar instead of 1.0.3 jars

SeleneseTestCase has been deprecated in Selenium 2.0 so you will see it scored through when you work with it using the Selenium 2 jars. This isn’t a problem as Selenium Simplified moves you away from this very quickly.

SaveAs from the IDE instead of view code

Page 57 starts to describe the process of attaching the selenium source code.

The source-code is contained in the Java Client download as selenium-java-2.0.0-srcs.jar, so attach this to your Java project to see the Selenium source-code in the IDE.

The instructions here might help http://www.qaautomation.net/?p=245 If you want to use early versions of Selenium with Firefox 4.

You could also use one of the compatibility images from Microsoft and install selenium, Eclipse etc. on that – then run against IE6 or IE7, or install a previous version of Firefox.

You need Virtual PC to run them

There are some tests that need to be amended to get working since the underlying apps have changed since they were created.

Google has changed since the book was released. The next edition will only use pages completely under the authors control.

All I changed was the base url in setup and the selenium.open links

when combining selectors with , the results are not guaranteed to come back in the order of the matched selectors so the test below fails.

Fails on the second assert in Firefox 4.

Interestingly this is different behaviour than the FireFinder plugin in Firefox 4 which would have the first assert fail and the second assert pass.

Using the combining operator the order of the matched items can not be guaranteed. Ignore this section of the text and comment out the first two lines of the test.

I initially thought this was a problem with the getEval. After investigating. It seems to me that a problem exists with assignId using Firefox. The code in the book works fine with *googlechrome

I have raised a bug against this http://code.google.com/p/selenium/issues/detail?id=2121

The getEval does work. If you use ”window.document.getElementById(‘combo1’).innerHTML;” This still demonstrates the intent of the test.

If you want to use assignId on firefox then you might have to use getEval to ‘simulate it’ e.g.

To achieve the same effect.

Pretty much everything worked. This shows that the Selenium team have done a really good job of backwards compatibility.

I suspect that some of the above issues will be resolved by future updates to the drivers.