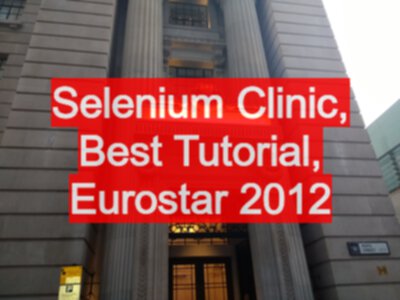 At Eurostar 2012 Simon Stewart (@shs96c, blog) and I presented the “Selenium Clinic” a half day tutorial on WebDriver.

We won the award for Best Tutorial.

We prepared a shed load of material, just in case no-one asked any questions.

Fortunately people did ask questions and the tutorial organised itself around the questions people had. We mostly managed to cover all the material we had. We didn’t get around to covering Page Object models in much depth and I don’t think we really covered domain models.

Fortunately, we released all the source code we produced in preparation on github, including the Page Object models and Domain Object models.

I used a subset of slides pulled from my Online WebDriver course as the clinic handouts because the slides on this course act as pretty good reference material.

A few interesting things to note when you look through the clinic code:

<< Eurostar 2012 Reflections
Unconventional Influences, a Keynote and Paper for EuroStar 2012 >>