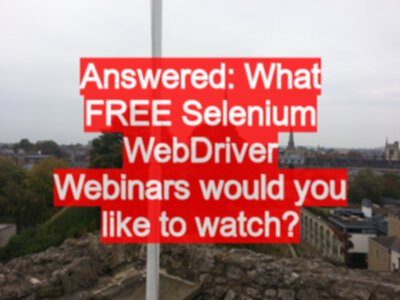 Answered: What FREE Selenium WebDriver Webinars would you like to watch?

I uploaded a survey a month or so ago, asking what people wanted to see in some webinars.

Thanks to all the people who responded: in the survey, via email, and via blog comments.

A summary of the feedback follows:

That is not really what these webinars will be about, although I will try and explain the Java as I go, because unless I say in advance that I’m targetting advanced users, I’ll be making these as accessible as I can.

I won’t do that since the course is there and I really want the webinars to support a different learning style.

I can do that, that seems like a good thing to do in a webinar.

Nope, but if we do live coding and live testing of a Web App then what I will do is describe the decisions that I’m making in context of the application under test.

In the webinars I plan to create tests live for an application and explain stuff as I go. A little like looking over someone’s shoulder as they code. This means that they may go more slowly for someone that knows how to work with WebDriver, but it also means that I will explain what goes through my head as I construct the code and not just explain the API.

If I was to train in your company, I’d want to try and use your actual applications as the training ground, and tick off and explain the API as we go, so the coverage of the syllabus becomes more fluid and contextual.

I’m going to try and do that in the webinars.

Full details of the first Webinar in the next post.