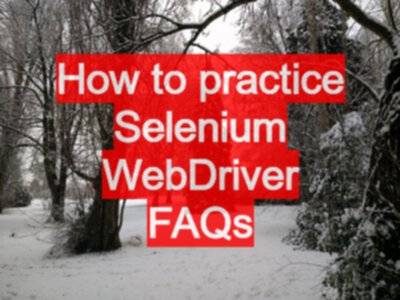 How to practice Selenium WebDriver FAQs

I receive a fair few emails from people asking if they can have the code to the web pages in my training and what other sites they can use to practice on. So consider this an FAQ post.

Question 1: Can you have my code?

Yes, I released it as open source

Please don’t use it to train people, but for personal use and practice. Knock yourself out.

Question 2: What do you practice on?

For some reason, people seem to practice on Google.com a lot. I don’t recommend this because it keeps changing, and they probably run A/B tests so sometimes you get one setup and another time a different one. When you are starting you want to use something simple.

Having said that, Simon and I did use Google in our WebDriver tutorial for Eurostar, and you can see the code for that on Simon’s github account.

I like to use the GWT Showcase, because it has some remarkably gnarly output, and it doesn’t seem to change too often.

In fact I liked it so much that I wanted a cut down version to help people practise on that wasn’t so heavyweight on the install side. So created a smaller clone, which has some deliberately horribly code for automating against.