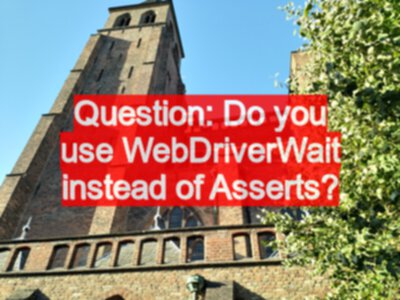 Question: Do you use WebDriverWait instead of Asserts?

I watched some of your lectures and webinars and it looks like you are using WebDriverWait partly as a substitute for assertions. Is that normal?

WebDriverWait will throw an exception if it can’t find the item. Which has a similar effect to an Assert i.e the @Test will fail. I do not view this as an assert, I view this as setting up the necessary preconditions for the test, rather than a specific ‘check’ that the @Test enforces.

I explicitly use Asserts when the Assert describes something important for the test. So when people read the test they know what I am ‘testing for’.

Sometimes I add an Assert after a WebDriverWait, even though I know the Assert will never be thrown if the WebDriverWait fails, because in the context of the code, the Assert documents something important for the test.

I do not create tests without Asserts in production, even if a wait could act as an Assert.

Upon review I’d consider the test unclear, and I’d have to add a comment saying “no assert because the wait will fail”. Also it would mean a reliance on abstraction layers or Waits, but the system may change over time and the abstractions and necessary Waits may also change. But since I encode the test rationale in the Asserts, if all the Asserts become irrelevant and we remove them, then we also remove the need for the @Test itself.

Also I don’t add asserts to my abstraction layers, but I do add WebDriverWaits.

Semantically they differ, even if the end result of using them might seem the same.