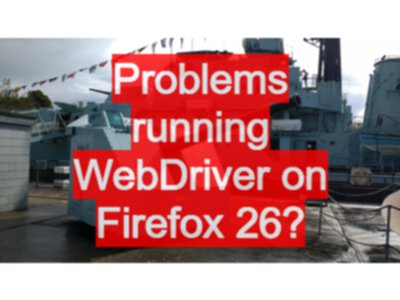 I had a quick look at version 26 of Firefox today, because a fair few people contacted me, saying they had been having issues with it.

Based on forums and calls for help, these people weren’t the only ones.

But, not everyone is experiencing the problem, so there is something odd going on.

I could experience the problem on my main Windows 8 machine, but I hadn’t noticed, because I hadn’t upgraded to version 26 of Firefox.

The fix I used was to downgrade my version of firefox to 25.0.1

And WebDriver worked fine for my basic test, I tried WebDriver versions 2.38.0 up to version 2.40.0.

I installed Firefox version 27.0b2, and it failed with the same problem I experienced with version 26.

I don’t know the root of the problem I’m experiencing, but my workaround will be to stick on Firefox 25 for my automation work.

Remember to use the Firefox Options \ Upgrade, and set it to not upgrade.

This might seem extreme, but when doing automation, we need to control the versions of software we test with. If you allow your browser to automatically update without your knowledge then you don’t know if your automation fails because of something you did, or something environmental.

Control of your environment means that when a problem happens, it is most likely something you did.

Given that other people have managed to get WebDriver working with Firefox 26. It might be an operating system based issue, or a plugin issue, or a heaven-knows-what issue.

If execution against version 26 is important to you, try running Firefox on a VM with a different operating system, perhaps from modern.ie. Or try running against Saucelabs.

But DO. DO keep control of your execution environments and the software versions running on them.

<< Question: Do you use WebDriverWait instead of Asserts?
How to emulate mobile devices using Chrome browser >>