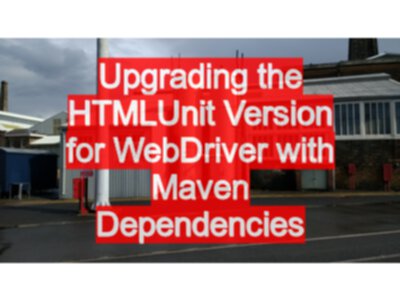 Upgrading the HTMLUnit Version for WebDriver with Maven Dependencies

Since HTMLUnit impressed me so much in my last run through of tests I wanted to see how the current version would perform.

I import the full selenium-server dependency since it makes life easy for me.

To bring in 2.15, I have to add a dependency on HTMLUnit itself in my pom.xml. And, provided HTMLUnit versions are backwards compatible, I should be good to go.

In the pom.xml before I import selenium-server, I import HTMLUnit

And when I run the tests against this version of HTMLUnit, I discover that a few more tests have failed.

Oh well, I guess the guys at SeleniumHQ know what they are doing, and the picked the best version.

But the point is - you can override the dependencies if you have a specific use case that needs it, or a clash in those dependencies.