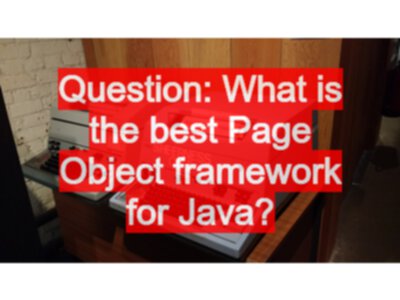 Question: What is the best Page Object framework for Java?

TLDR; Q: what is the best Page Object framework? A: I don’t know. I don’t use any

Question: What is the best Page Object framework for Java? And are there any tools to build Page Objects e.g. scan the page and create a class with all the @FindBy annotations on WebElements etc.

I don’t know. I have not researched any Page Object frameworks. I don’t use any, and don’t recommend any.

I know there are plenty of libraries for other languages

And there are bound to be more. I don’t know.

I don’t even recommend using the Page Factory built in to Selenium WebDriver e.g. @FindBy’s etc. because every time I’ve used it, I have eventually moved away from those annotations and the PageFactory.initElements to allow more flexible synchronisation and more flexibility in general.

But note the “every time I’ve used it”. Because…

There was a time when I did want a framework to make it easy.

But that was when I viewed writing the Page Objects as drudge work. Work that added no value to the automating.

In fact. Every class we add has a reason. The classes represent a model of my understanding of the application and how we would go about automating it.

I think being aware of that allows me to build cleaner and simpler code.

They would also be hard to use. Imagine code completion on an automatically created Page Object, there would be no grouping of elements into headers and footers, or identified widgets, there would just be a big list of stuff - and would the automatically generated names read well enough to explain what they were for?

I can understand why such a tool or framework would look attractive, but longer term I think it would hamper, rather than improve, productivity.

In the Page Objects and Beyond tutorial and talk, I show code which has many different approaches to abstraction for Page Objects:

And there are more. You would miss out on Actor/Task type approaches like screenplay pattern.

I have a general aversion to frameworks.

I don’t mind libraries, but anything that controls the way I write the code, I try to minimize my exposure to.

Because I’ve learned to value flexibility.

I know I’m going to refactoring my code, to improve the structure and implementation.

I don’t want anything that might get in the way of my doing that.

It could be that there is a perfect framework out there for me, and because I’m not looking for it, I’ll never find it.

But I haven’t needed it.

PS. Having said all that, if you find one that works well then let me know.

<< Is JUnit only for unit testing? What about system testing or UAT?
WebDriver Windows 10 Anniversary Build and Edge 14393 >>