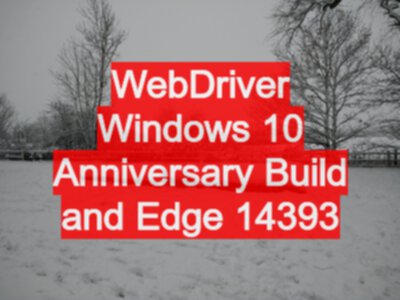 TLDR; if your version of Edge is not listed on the WebDriver Edge page, try the insider build.

I am experimenting with Selenium WebDriver 3.0.0 beta2 at the moment - more on that later. And this morning I could not get MS Edge to work. I could not understand how the beta was affecting Edge.

And then I remembered that I upgraded to Windows 10 Anniversary last night so now Edge is on a new version:

A quick look at the Microsoft WebDriver Edge page reveals no listed version for 14393.

And lo, there was a clue in the second link.

But I tried that and it worked.

So for the moment - if you are on 14393 of Edge and it still isn’t listed on the Microsoft WebDriver Edge page  then try the insider build.

P.S. You might also want to double check your IE Security Zones, because mine were no longer set to the same protection setting.

<< Question: What is the best Page Object framework for Java?
Selenium WebDriver 3.0.0-beta2 and JUnit and GeckoDriver v 0.10.0 >>