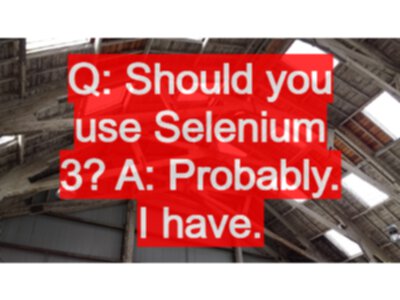 Q: Should you use Selenium 3? A: Probably. I have.

TLDR; moving between Selenium 2.53.1 and 3.0.1 takes very little effort. You should probably try it.

I spent time last week and this week running them against:

I’ve left instructions for 2.53.1 in there, but I’ll phase those out after a few point releases of Selenium 3.

I recommend that people starting to learn Selenium WebDriver use Selenium 3.0.1 and use ChromeDriver as their default browser.

Because it is much more mature than GeckoDriver, and if you do want to drop back to Selenium 2.53.1 you won’t have to make any changes.

WebDriver in CI locally and with Cloud vendors

I have a simple CI project on github

I run this locally on a bunch of browsers through Jenkins, and on travis-ci, and against SauceLabs and BrowserStack.

I had to make minor code changes when starting Firefox to upgrade to Selenium 3 and I found no obvious issues.

So I have upgraded my wdci project to use Selenium 3.0.1

All I had to change was how I started Firefox browser. Now this isn’t a particularly large set of tests, or even complicated tests. So it might not be enough to convince you.

I normally try and use remote grids and they worked fine.

I did try on a local grid and the only thing I had to change was the version number in the file name of the selenium jar. Everything else worked for me.

Admittedly I don’t ‘do’ much with the local grid. But for basic usage I found no issues.

In fact, GeckoDriver v 0.11.1 worked better from a grid node, than it did from calling directly.

What about bigger code bases?

I haven’t found any issues with ‘Selenium’ in my main code.

My issues tend to be cross-browser or ‘cross-driver’ related, rather than Selenium related. And mainly relate to synchronisation - the bane of cross-platform execution.

For Firefox, clearly we have to change how we instantiate the driver, and GeckoDriver is still a work in progress. But the legacy Firefox driver in Selenium 3.0.1 works just as well as the one in 2.53.1 so if you’re still using the FirefoxDriver rather than GeckoDriver I don’t think you’ll notice a difference during execution.

The problem I found was my tendency to conflate ‘driver’ issues with ‘Selenium’ issues.

It is easy to do that since we tend to upgrade driver versions at the same time as Selenium, and - in the case of HTMLUnit, I had to update the driver when I updated selenium.

But by moving to Selenium 3, we will hopefully have less of that confusion since the separation between driver and Selenium becomes much cleaner.