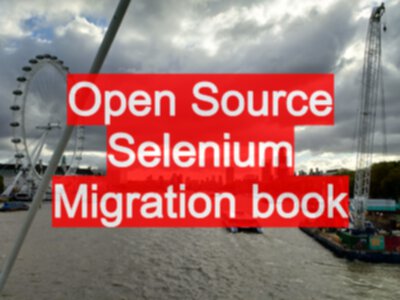 Back in 2011 I started to document migration steps from Selenium 1 to Selenium 2.

I covered Selenium 1 in Selenium Simplified and Selenium Webdriver in my online training course.

I created a workshop to support people migrating and seem to have converted into a ‘book’ format between 2011 and 2014.

Time to release it as Open Source.

The repo above has all the source code for the book:

The repo has a Selenium 1 code folder \initial-code

The ‘book’ is the text for the workshop and has all the migration steps and refactorings and code changes for moving from initial-code to migrated-code.

You can find the pdf of the book to download from the releases page.

The book is pretty much untouched since 2014.

I made a few small changes to generate the PDF.

The code isn’t runnable since it uses Ant and I haven’t added the dependencies into the repo to keep it small - plus those version of Selenium won’t work with current browsers.

I think it is important to release as much of our work as we can. But also. Because it is a case study. I think it still has value.

Hopefully it adds some value, and it helps me trim out some files from my hard drive.

<< The Question - Are there any Software Testing super heroes?
Notes on Shift Left in Testing and Software Development >>