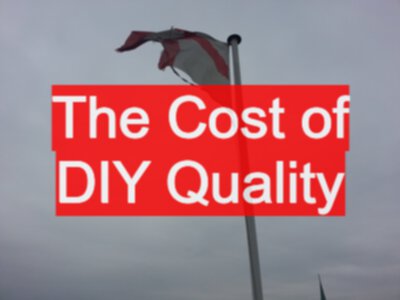 The Cost of DIY Quality

I bought a garden bench from a DIY store. It was one among many similar benches and I had difficulty deciding which to buy.

Fortunately the store had one of each assembled so I was able to sit on them and try them out. I picked one in the middle of the available price range, aesthetic enough to meet my visual bench criteria, and sturdy enough to cope with the demands of visiting nephews and feral squirrels.

Placing one of the flat packed benches into the trolley, I proceeded to the checkout.

The reader will no doubt have in their mind some direction in which this tale is going to go, based on their own experience with either flat packed products or DIY stores. It is highly likely, since I know how the tale will unfold, that it will map well onto those reader experiences which generated disappointment.

When I got home I started to unpack the bench components. Noting with assurance the box sticker informing me that the product inside was made to exactingly high standards and of the superlative quality that I could expect from the DIY store.

I estimated an hour to construct the bench and install it in the back garden so duly set aside the required time, this left me a spare half hour before I absolutely had to sit down and watch the weekly episode in the lives of a group of space adventurers on the television.

I will merely summarise what followed before moving on to the moral of the tale.

I shall instead focus on the cost of quality and the management of user expectations.

Ultimate Quality is in the eye of the beholder, not the agent nor the producer. Quality is a subjective thing with quantifiably measurable attributes.

Ultimate Quality is determined when a product is in the hands of the user. Dr Genichi Taguchi has said that the cost of quality is the “cost to individuals, organisations or societies of the cost of poor quality”. The cost to the DIY store was the loss of any future possible sales and the sneering derision of its products to anyone mentioning to the author of their intention to shop there.

The user had had demonstrated a complete and pristine product, whereas they would be supplied with a product that required much user intervention to complete. Had the expectations of the user been communicated at the demonstration then it is possible that the user might have bought an entirely different product but it would have meant that the user would have been surprised only by those failed quality attributes that had escaped detection than considering attributes that were part of the specification as part of the problem.

The seal of approval led the user to view the processes conducted by the company as flawed and would subsequently use that view to evaluate the company and their other products thereby eliminating the company entirely from their preferred supplier list.

I’m not suggesting that every product come with a disclaimer saying “use at your own risk”, although most software products do seem to come with just such a disclaimer. But if you believe in the quality of your product, and state as much on the box, then have a money back guarantee rather than relying on the consumer’s right of return. This is one of the Hypnotic Laws of Advertising set out by Joe Vitale.

The user then reacted, as users do, vocally and loudly against their perceived wrong, thereby spreading bad publicity about the product to other potential users.

So what can the producer do about it?

Well, if they are a software producer they can offer free upgrades, as many as it takes to get it right. This happens with commercial software products in the real world. But doesn’t tend to happen if the software is written for internal users.

The user probably paid for internally produced software and they will probably be expected to pay for any fixes. This is a policy which leads to bad feeling in organisations, and may well be unavoidable due to the manner in which IT departments are funded, in which case the IT organisation has to do so much more to smooth it over.

By treating the users’ complaints as justified, by responding to problems in the existing budgets as well as possible, by doing everything they can to get a happy user, because their future depends on a happy user and that happy user’s budget.

And what can our DIY store do about the user dissatisfaction. Perhaps the internal IT department can learn from them.

The DIY store obviously can’t offer a patch or an upgrade. Like an internal IT department they can’t afford to give the money back, the user would simply take it, go to another store and continue to lambast about their poor quality products. But, what if the DIY store convinced the user that it was a 1 in a million failure and that they believed in their products so much that they were going to give the user vouchers to spend in their store at more than double the cost of the initial product. The user can obviously only spend the vouchers in the DIY store, that at least gets them back in the store, hopefully with a better shopping experience and possibly adding their money on top of the vouchers or coming back again.

Obviously internal IT departments can’t offer the user 2 million dollars in free software development credits but they do have to go out of their way to make the user relationship work. Their job is to ensure that the user’s experience of the quality of the software and the software process is second to none, after all, the user is paying for it.

Oh, and by the way, after various trials and tribulations, near death situations and false starts, the space adventurers won.

This essay originally appeared on CompendiumDev.co.uk on 4th January 2012 as a ‘journal notes’ this was in the days before I had a ‘blog’ setup and still had a ‘web site’. It seems more like a blog post than an essay so I’ve moved it over to EvilTester.com.