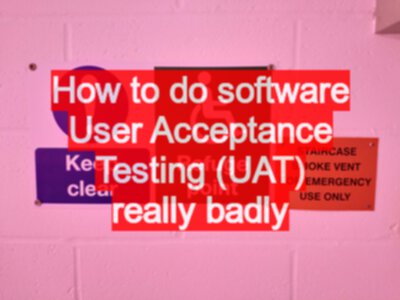 How to do software User Acceptance Testing (UAT) really badly

I’ve made a lot of mistakes over the years when testing. I try not to make each mistake more than once - which usually means any future mistakes require more creativity or stupidity on my part. Here are some UAT mistakes.

I will describe some of the mistakes I (and other people I have known) have made when doing UAT so you can use more creativity (or more stupidity - you get to choose) when approaching UAT in the future.

I learned different things from each of those situations and would approach them in different ways now. In fact I now a generalised model of UAT that avoids all of the above issues. I’ll cover that in a later post but for now… What would you do differently?

Hint: Instead of treating each of your answers as ’the’ solution, or even ‘a’ solution. Treat it as a countermeasure - because whatever you come up with, the system will respond to match it, and may require another countermeasure. So as well as identifying what you could do - work out what would happen as a result.