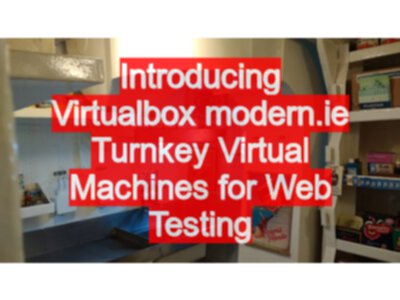 My install of VirtualBox prompted me to update today. And I realised that I hadn’t written much about VirtualBox, and I find any videos I had created about it.

Which surprised me since I use Virtual Machines. A lot.

No Matter, since I created the above video today.

In it, I show the basic install process for VirtualBox. A free Virtualisation platform from Oracle which runs on Windows, Mac and Linux.

Also, Microsoft, which I know I have mentioned before. The Microsoft site where you can download virtual machines for each supported version of MS Windows, with a variety of IE versions.

Perfect for ‘compatibility’ testing - the main use case I think Microsoft envisioned for the site. Or for creating sandbox environments and for running automation against different browsers, which I often use it to do.

I even mention TurnkeyLinux, where you can find pre-built virtual machines for numerous open source tools.

In fact the version of RedMine that I used on the Black Ops Testing Workshops to demonstrate the quick automation I created. I installed via a TurnkeyLinux virtual machine.

Oracle, even host a set of pre-built virtual machines.

A New Feature in VirtualBox (that I only noticed today)

I noticed some functionality had crept in to VirtualBox today.

I love this feature. It means I no longer have to keep switching in and out of a VM Window and can run the virtualised apps alongside native apps. And with shared clipboard and drag and drop, it seems too easy to forget that I ran the app from a VM.

If you haven’t tried this yet. Download VirtualBox, install the Win XP with IE6 VM, and then run it in ‘Seamless’ Mode so you have IE6 running on the desktop of your shiny whiz bang monster desktop. Try it. Testing with IE6 becomes a fun thing to do - how often do you hear that?

<< How to emulate mobile devices using Chrome browser
Back to Basics: How to use the Windows Command Line >>