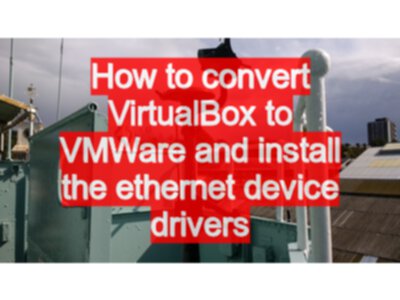 I couldn’t work around the recent bug in VirtualBox version 4.3.14. It conflicts with my Anti-virus software under windows.

When I upgraded to version 4.3.15, I no longer experienced the anti-virus crash, but my networking was trashed and I couldn’t get it working. So I decided to try and migrate over to VMWare.

I use VMWare Fusion on the Mac to run my Windows and Linux VMs, and VMWare VMs are cross platform. It seems like a sensible move, even though it will cost me some cash to buy the VMWare Player on Windows.

Step 1 - convert VirtualBox to an Appliance

In VirtualBox I exported the VM as an appliance using the “File Export Appliance…” menu.

Step 2 - load the appliance into VMWare

VMWare complains about certificates, but we tell it to retry and continue.

Then it prompts to save as a VM location.

Voila, the VM is converted - but it doesn’t work yet.

Start the VMWare machine, and uninstall the VirtualBox addons.

At this point, we should be finished, but I wasn’t. I had to fix the networking.

It took me a while to find the right online resource for the next step.

Step 5 - edit the .vmxf file to change the network settings

I could not get the drivers for the ethernet adapters to work with the VMWare Windows XP VM.

I had to edit the .vmxf file that configures the virtual machine, and remove the “e1000” line.

Then, when I restart the machine, the correct drivers from the VMWare tools are used for the ethernet device.

At this point Windows complains that the hardware configuration has changed, and needs to re-authenticate.

I couldn’t face a re-install of Windows, and downloading all the service packs etc. So I wanted to get this conversion working, which is why I persisted, and you now see my notes as a blog post.

So now. I’ll use VMWare for my VMs on Windows, as well as Mac.

Hopefully, Oracle will fix VirtualBox fully, as I like to have options.

Since I use licensed versions of Windows, in addition to the microsoft 90 day VMs, I had to remember to delete the VirtualBox VMs.

<< Getting mvn setup to persist on a Mac
FAQ: Should I use JUnit or TestNG, which is better? >>