I previously mentioned that “Java For Testers” teaches Java without writing main methods, and in fact uses @Test annotated methods for all of its code.

I write tools like that, certainly for short lived tools that I might otherwise have to use a scripting language, or MVPs to try things out.

It is only after I have the basic MVP code, and then demonstrate the re-use value of the code (i.e. I re-use it enough to justify a GUI or command line interface) that I add a main method.

In this post I’m going to give a quick example of what an MVP tool in an @Test method looks like.

(skip to the bottom of the post if you want to watch a video of the approach in action.) 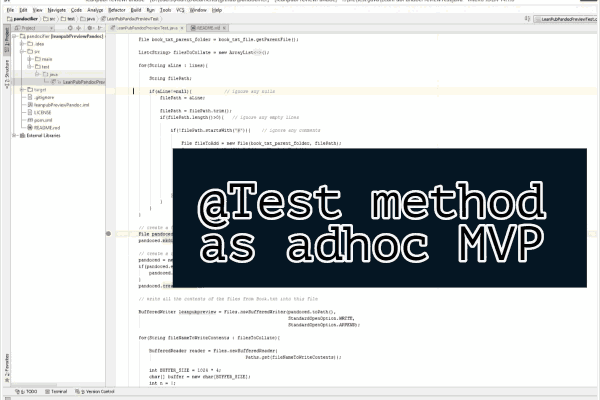 A few caveats before I start though:

Since this was an MVP. I have a very specific task in mind. I’ll explain my usecase:

I want to write a document ‘as though’ it were a leanpub document, with Book.txt, but have the ability to create a pdf locally.

I had a quick look on github to see if any other ’tools’ had already been created for this purpose.

Both of these are written in scripting languages (ruby, python).
I thought that I’d knock up something simple in Java rather than install Python or Ruby to try these scripts.

Since this was an MVP:

You can also see that I made a note of the limits of my experiment i.e. what it won’t do.

I then created an @Test method to act as my GUI.

I then worked through each comment in my requirement spec and wrote the code for it.

(You can see the rest of my adhoc code over on https://github.com/eviltester/pandocifier)

Since I didn’t use TDD, the ’test strategy’ adopted was ‘build & check’. At the point that I wrote code that implemented each ‘comment’, I ran the @Test method in debug mode to check it was doing what I expected it to.

I didn’t spend a lot of time working out the ‘best’ way to implement the comment. I just wrote the ‘first’ code that worked well enough.

This approach got me to the bottom of the requirement list, with code that did the job, and an output file that I could process via pandoc to ‘preview’ a ’leanpub’ project.

I don’t normally release these type of MVP or adhoc tools to github. I normally have them on my local or xp-dev hosted repos.
But, for you, I’ve added this to Github so that you can see an example of using @Testmethods to create short lived, adhoc ’tools’.

And if I do continue to use this tool, and refactor it to make it live longer, then you’ll be able to see the evolution of the code on github.

The github repo is https://github.com/eviltester/pandocifier

PS. this blog post was drafted using Markdown, written in Evernote, and converted to HTML using dillinger.io and pasted into blogger.com