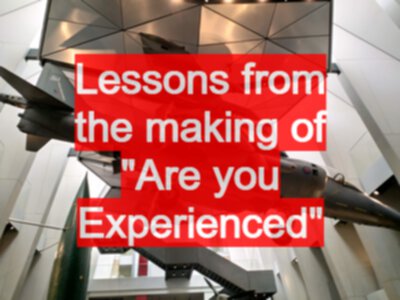 Lessons from the making of "Are you Experienced" 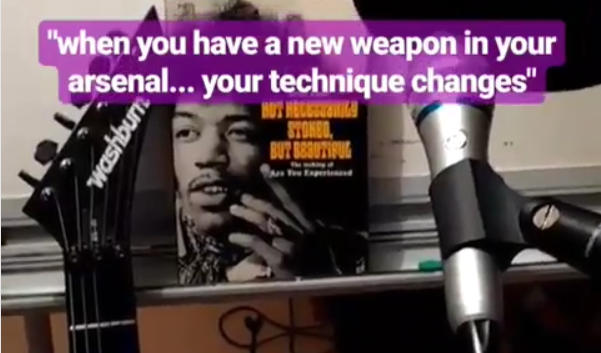 I’m not exactly sure what I was hoping to learn when I started reading “Not necessarily stoned, but beautiful” subtitled “The making of Are You Experienced” by Sean Egan - a book which chronicles the making of the debut album by the Jimi Hendrix Experience.

But I pulled out information about Hendrix guitar playing that I didn’t know.

Hendrix was clearly someone who had practiced technique and was a master of his instrument. Clearly technically proficient. But he also brought something else into the mix - he had mastered his technology.

Jim Marshal “attributes Hendrix’s trademark fat, larger-than-life guitar sound to an understanding of sonics and technology beyond even his highly talented contemporaries.”

He is quoted in Sean Egan’s book as saying ““He was relying purely on the harmonics of the amplifier to produce his sound. He never had the volume of the guitar turned up that much. I think then you would have got too much distortion, whereas he was feeding the amplifier correctly and using the harmonics correctly.”

Hendrix then, according to the person who created the amp that contributed so much to his sound, had mastered the technology which he could then use his technical expertise to explore more than his contemporaries.

So much so that Vic Briggs said “I don’t think that he could have done without one, as least not for maybe a few months or a year. ’til the technology caught up.”

I find it interesting that in Software Testing we associate ’technical’ with programming and not with a mastery of the technology we test and the tools we use to test it.

I’ve said in the past that when we learn the tools, the features in those tools can give us new ideas on how to approach our testing. A statement that was echoed in Sean Egan’s book by Roger Mayer (the weapons manufacturer (or effects builder) for many of the pedals that Hendrix used): “Of course, when you have a new weapon in your arsenal, so to speak, your technique changes”.

Tools can expand our horizon, indeed when we approach a new technology through the eyes of a tool we have to learn new concepts in order to use the tool and we can learn to harness them for our own ends - which might be different from their intended use e.g. using security Fuzzing tools to create test data.

Vic Briggs On Noel Redding - “When you come to an instrument without the preconceived notions that you get from being trained in that instrument, sometimes you can do surprising things.”

I learned little about how Hendrix approached his technique or practice. But I learned that tooling was vital to Hendrix’s success and that he would have been unable to effectively harness the tool if he had not honed his skills and technique prior to the tool acquisition.

Lessons to carry forward then…