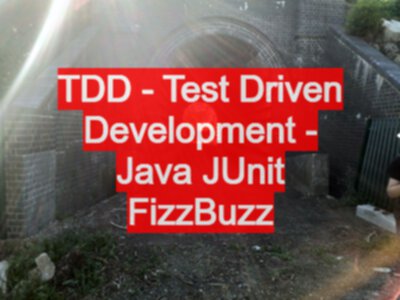 As part of a Sunday Morning practice session I used FizzBuzz as my coding exercise.

I’ve heard that this is used in programming interviews and I so I thought I’d try it.

The video I created of the TDD session is at the bottom of this post.

The first Test I wrote was:

This forced me to create the FizzBuzzConverter class and convert method.

I added a second assertion to this test:

This forced me to actually implement the default code in convert:

Thoughts on My First Test

Some people don’t like multiple assertions in a Test.

The second test was:

This forced me to implement the ‘3’ division rule:

I imagine that if you don’t know the modulus operator then FizzBuzz can be quite hard.

I learned modulus back in the day of 8 bit programming and have been using it for various boundary, clipping, and scrolling routines ever since.

The third test was:

Much the same as the condition for number 3:

At this point my convert method looks as follows:

I have seen people create very complicated code for FizzBuzz.

I’m keeping it simple on the basis that. If I can get it working, then I can refactor it for efficiency or ’looking like a good programmer’ later.

My Fourth Test was much the same.

At this point though, when I looked at the convert method I started to think:

Instead I decided to keep it simple:

I suspect that this is the point at which people ‘fail’ to implement FizzBuzz, because the code in the method becomes over complicated.

My @Test methods do not warrant any complicated code:

There is a priority to the conditions where:

In olden days we were taught to have a single return value per method. If I had written the code this way then it would be more complicated. Instead I return as soon as I’ve matched a condition.

The conditions are really as set of ‘guards’ to prevent fall through to the default operation.

Or at least I have an algorithm that will support the conversion of integers in the range 1 to 100 into Fizz, Buzz, Number or FizzBuzz

All I have to do is wrap it into something that will print out the values.

I created it as an @Test for expediency and I can execute it from the IDE.

And then the tester kicks in

If this was a programming interview I might have to convert the outputTheHundredFizzBuzzes into a main method and run it, but the basic implementation of the requirements have been met.

As a tester I’m not sure I have convinced myself it ‘works’, but it ‘works’.

You can find all the code for this in the repo https://github.com/eviltester/fizzbuzz