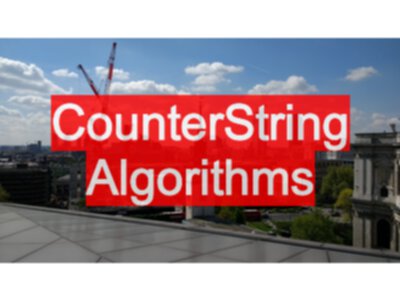 TLDR; Reverse counterstrings are easier to generate. Creating same output forward is harder but might be useful for streaming or files.

I assume everyone has heard of and used CounterStrings. I came across them because James Bach wrote about them and created the perlclip tool to generate them.

Over the years I’ve written a few utilities for generating CounterStrings for a variety of platforms. I had to implement them in Excel once because we weren’t allowed to install any test tools. Fortunately, with Excel we had VBA and could write anything we wanted.

The simplest, and most elegant way to create a CounterString seems to be the approach used in PerlClip.

Perl seems like a pretty efficient language, I don’t know if it reverses strings in the same memory buffer or not.

But back in the olden days I used to worry about memory usage a lot. Stems from growing up with 48K.

Very often with CounterStrings we generate large strings. And it is possible to blow out the memory allocated to your process.

I haven’t seen that happen with PerlClip.

I did see that happen with the Excel version I wrote

And I have run out of heap space with the Java version I wrote.

The most obvious way to reverse a String is to:

Which would, at a minimum, double the memory usage for the String.

Perhaps there is a way to generate CounterStrings forward instead of reversing?

A forward counterstring, without predicting the * boundaries would likely generate something like this for 15:

You can still pretty much tell that it is 15 chars in length, but if we want to use the notion of “Self Describing Test Data” that James Bach set out to achieve with CounterStrings then we didn’t do a particularly good job.

The problem with generating CounterStrings forward is that you need to predict certain things.

There are some choices that are pretty easy to predict. e.g.

Does the value I want to hit fit in the remaining spaces? If so then use it. i.e. after 7 we can predict the next string.

The algorithm would have to predict that it needed to start with * and it needed to make a different decision in the middle of the string.

The Forward CounterString algorithm that I used in Excel, didn’t predict. The results were functional but not aesthetic.

After staring at far too many counterstrings I thought:

e.g. with the 15 example above

All I really have to predict are the boundaries, then I can fill in the blanks.

And after trial and error, I wrote code to do just that:

I have refactored to get that code, and removed some code for unnecessary edge cases.

I can probably tidy up the general objects that I’ve used:

But I’m OK with it as it stands.

For the Mathematically Inclined

I have no doubt that there is a more elegant solution for those who are mathematically inclined. Or perhaps, your external review, of my approach and code, will reveal some shortcuts that can help.

I’m happy to learn of better ways to do this.

Generating a CounterString using a Predictive Forward method means that it is easier to generate counterstrings for:

Potentially, I could save memory and make things faster by allocating a fixed char array and populating it in one pass.

And, because… the challenge.

If you have any links to other CounterString implementations then feel free to leave them as comments so we can all learn from others.