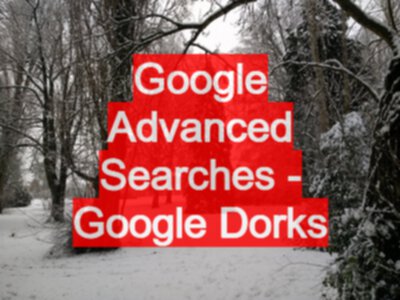 This morning I experimented with some Google searches which can reveal information on public sites.

These are now know as Google Dorks.

I first learned of these in “Google Hacking for Penetration Testers” - the book was originally released in 2004.

Here is a presentation from the author of the book:

And the book is now in its third edition:

If you search for Google Dorks then you’ll find lists of common searches and searches that can expose possible SQL injection points etc.

I then spent a couple of hours emailing companies with issues.

Thus far I have heard back from one company. They were very prompt in their response and clearly take security seriously. They make a wordpress plugin that was the cause of many of the log files I was seeing.

Sadly. To summarise their response:

And its true that this is an issue for the site owners. When you are running wordpress you need to keep up to date.

You could automate finding these as a public service

I would probably have written a script which periodically performs the various Google Dork searches which expose the data, and (given that the site email address is listed in the exposed page) scanned the results for email addresses and automatically emailed them.

This could also be a good ‘sales’ tool to get people to upgrade to the most up to date plugin and provide some good community Karma.

If every tool or plugin scanned the web for out of date plugins of its own stuff, and told people there was a problem, we might have fewer problems.

When people find stuff on line they tend not to tell the site owner.

I remember when EvilTester.com was a Wordpress site and I wasn’t really using it and it was hacked and I didn’t notice. All my fault.

Somebody did notice. And they reported it to a website that rates websites. But not to me. So the site now has a poor rating on a web site that rates web sites, despite changing technology and not being an issue.

But the point is… tell the site owners so they can fix it.

And if you run a site where people report issues on other sites - tell the site that has been reported.

Things get fixed faster when problems are reported.

I contacted two large companies today. Both of whom were leaking payment gateway and customer details into Google’s cache.

All the issues I found could have been found by those organisations if they periodically searched for their site on Google for pages.

Try it yourself on your domain.

If you never release any text files then try:

if you never release any log files publicly then try:

There are a vast number of searches you could do but if you build them around the structure and requirements of your site then you will find things more easily.

Who’s job is this?

Whomever is reading this. Try some Google Dorks on your site. If you find something. Figure out how to add it into your ongoing monitoring process.

In the face of GDPR, this becomes ever more important.

Sadly, if you start searching for these problems without limiting it to your domain you will find so many in the wild that you will distrust every site you use. And you will never stop raising issues with site owners letting them know they have problems.

Which is why we need to try and keep our own house, and those of our immediate neighbours, in as good order as possible.