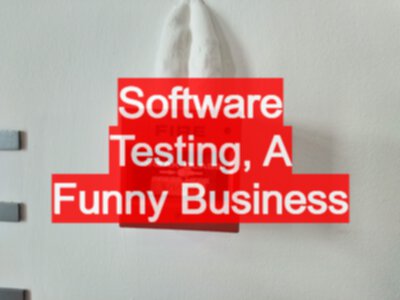 “I did stand-up comedy for eighteen years. Ten of those years were spent learning, four years were spent refining, and four were spent in wild success… enjoyment when performing was rare - enjoyment would have been an indulgent loss of focus that comedy cannot afford. After the shows, however, I experienced long hours of elation or misery depending on how the show went…”

I spent the first ten years of my testing career learning, since then I’ve spent the years refining and learning. I haven’t enjoyed the wild success yet. But then I test software rather than perform stand-up comedy… but on some projects- who can tell the difference?

First we learn from other people.

Steve describes in detail how he watched other people work, listened to their acts, recited them verbatim, studied the timing, used their jokes, learned their techniques.

I can not imagine a single tester who could not put this approach into practice: read some books, read some blogs, look for experience reports and put their descriptions into practice.

Use this ’learn the basics’ stage as a starting point.

Learn the basic techniques, get them down pat.

Then move on - do not get stuck here.

Then we learn by working with other people.

Experiment and try out new things.

Testers are made, not born.

“But there was a problem…I had absolutely no gifts. I could not sing or dance… Thankfully, perseverance is a great substitute for talent.”

Reflect on what you do

Steve Martin shows some of his notebook pages in his book and describes his self critical process of making notes on what worked, what didn’t, and what to try next.

Incorporate this practice into your test process. Learn from your mistakes. Learn from others’ mistakes. Tweak what you do and observe the results. ‘Be’ your own experiment.

Steve Martin studied philosophy and incorporated elements of that into his act.

The process of studying philosophy also changed they way that he approached the analysis of comedy and viewed his act.

We can’t predict exactly how the study of other disciplines will affect what we do. We just know they do.

Build theories and models of what you do, then break them

I eventually had to unlearn many of the things I learned from more experienced testers. The construction of my own models helped move me forward and helped me take responsibility for my own testing theories. I could no longer rely on the “call to authority” to convince others. I had to believe in my own models and learn how to convey them effectively.

I continue to learn how to convey them, because those models keep changing.

To do this - try and explain aspects of your craft to other people. Find new ways to view what you do. Stop using words like “Functional testing”, “Integration testing” - find new ways to express what you think you mean when you say those words.

Keep learning - and not just learning from other people - learn from yourself.

Recognise when you stop advancing

Steve Martin describes in detail what happened when he got successful. That the system of success stopped him moving forward with his comedy and stopped him enjoying what he did. Steve Martin moved into films.

When all else fails, wear an arrow through the head

Uh-oh! I’m getting.. Happy Feet! See, every once in a while that happens, I have no control over it. Sorry. Okay. We’re moving along now.