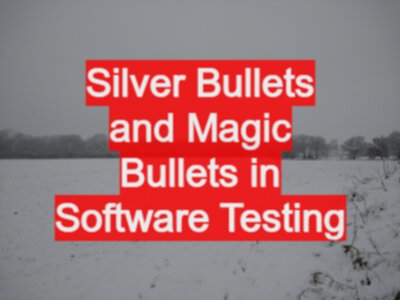 The May 2013 edition of TestNet news has an article I wrote to accompany my Keynote. The article was entitled “Silver Bullets and Magic Bullets”, it covers similar ground to the Keynote but shorter and with slightly different analogies.

This article appeared in TestNetnieuws 17-1 published by TestNet in May 2013.

But I refuse to believe that.

I love the myth of Silver Bullets

I love the myth of Silver Bullets. I have delighted in the notion of silver bullets since I was a child. If I packed a pistol and some silver ammunition, then I could be safe when werewolf hunting. The Lone Ranger uses Silver Bullets, thereby adding to the romanticism of The Wild West.

The Silver Bullet has a mythic resonance that I don’t ever want to lose. I remain enamoured with Silver Bullets.

As a child, having learned that werewolves don’t exist, I started to think about the origin of the myth. Being someone who does the minimal of research, and drawing upon everything I knew from dimly remembered black and white horror films. I assumed that if I were a wealthy landowner in the 18th century and wanted to shoot peasants without repercussion, then by using silver bullets, I could claim that the peasants were actually werewolves, and I was acting in self defence.

Are Silver Bullets an Excuse for not thinking through decisions?

My early understanding of Silver Bullets, was to interpret them as an excuse. A device to justify and cover up a human failing. In the case of my early theory, a failing that consists of psychopathic tendencies, but we can generalise this to any human failing.

The danger is that we still do this. We still use Silver Bullets as an excuse for not thinking through decisions, hoping that our single decision to adopt something external: that one tool, that one process, that one metric. Will make the ultimate boost to our effectiveness.

But that doesn’t make Silver Bullets bad, it just reminds us that we, ourselves, have a tendency to get overexcited about new toys.

As a child, I learned that The Lone Ranger used Silver Bullets. How could I not love silver bullets? Lone Ranger books were hard to get hold of back then, so I had to rely on infrequent comic and TV appearances to educate me in the ways of the wild west.

I don’t remember a single instance of The Lone Ranger going up against a werewolf, so I suspect he was just overly superstitious.

The Value of Humans

Over the years I’ve come to realise that The Lone Ranger’s silver bullets were there to remind him of the cost of a human life. Every bullet was outrageously expensive because, with every bullet fired it might deprive the Universe of a human life. Granted that doesn’t communicate well when most of the people The Lone Ranger fought were actually murdering criminal scum. But the sentiment remains.

And yet we still seem to consider Silver Bullets as ‘bad things’.

Magic Bullets a Cure for a Single Problem

It might even be, that “Silver Bullets” stem from an earlier mythical tradition.

Paul Ehrlich, the German immunity scientist wanted to find “magic bullets”, cures that would target a specific germ and kill only that, leaving the rest of the organism unharmed. Perhaps imagining himself as a “Freischütz” from Germanic folklore, without the demonic overtones of course.

The “Freischütz” being someone who could shoot, seemingly without aiming, and hit whatever target he so desired - with the required folklorik caveat, that the last bullet would lead to his ruin.

Again with our etymology hat on, we might posit that that the “Freischütz” stems from someone with incredible skill. An expert, who makes it look as though no effort is involved in the shooting, that no aiming takes place because they do it better than other people. And so through the jealousy of observers, and through their decision not to practise and better themselves, a myth that to be that good, you need ‘magic bullets’ springs up. And that if you do attempt to master the skill then that mastery will lead to your ruin, so don’t do it, don’t aspire.

We have to be careful that we don’t dismiss things too early as Silver Bullets, because we don’t believe they could work. When we might not be prepared to put the work in to make them happen.

We have to be wary that we label the shiny ‘new thing’ as a Silver Bullet, when in reality we aren’t prepared to drop our preconceived notions of how to do something and put the time in to improve.

With the addition of our “Magic Bullets” etymological thread, our “Silver Bullets become ever more mythical. Yet still, through our oral tradition, we would try to tarnish them as something impure.

Silver Bullets are a Quest, not a Destination

I love the mythic nature of Silver Bullets. To me, they represent “The Quest”.

I hunt for an elusive state that if I can ever just reach it, then I know I will improve my skill massively.

On my quest, with each adventure, with each tool I try, and each technique I master; when realise that they are not ‘The’ Silver Bullet, I grow stronger and I continue my quest.

Yes, there are dangers this quest, as there are on every quest.

The biggest danger is stopping early, seduced into believing you have reached its end, proclaiming that you have found “The” Silver Bullet, when you still have a ways to go.