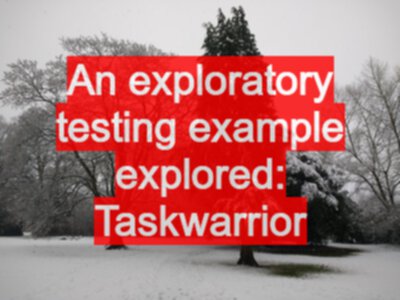 or “Why I explored Taskwarrior the way I did”.

In a previous post I discussed the tooling environment that I wanted to support my testing of Taskwarrior for the Black Ops Testing webinar of 22nd September 2014.

In this post, I’ll discuss the ‘actual testing’ that I performed, and why I think I performed it the way I did. At the end of the post I have summarised some ‘principles’ that I have drawn from my notes.

I didn’t intend to write such a long post, but I’ve added sections to break it up. Best of luck if you make it all the way through. 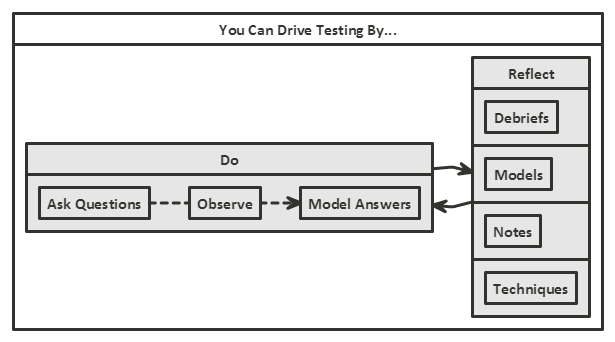 Therefore to meet the context:

I make these points so that you don’t view the testing in the webinar as ’this is how you should do exploratory testing’ but you understand ‘why’ I perform the specific exploration I talk about in the webinar.

And then I started Learning

So what did I do, and what led to what?

I spent a quick 20 minutes learning the basics of the application using the 30 second guide.

At this point I knew ‘all you need to know’ to use the application and create tasks, delete tasks, complete tasks and view upcoming tasks.

Because of the tooling I set up, I can now see that there are 4 files used in the application to store data (in version 2.2)

From seeing the files using multitail, I know:

In the back of my head now, I have a model that:

All of these things I might want to test for if I was doing a commercial exploratory session - I don’t pursue these in this session because ‘yes they might make good viewing’ but ‘I suspect there are bugs waiting in the simpler functions’.

I take my initial learning and build a ‘plan’

I decide to experiment with minimal data for the ‘all you need to know’ functionality and ask myself a series of questions, which I wrote down as a ‘plan’ in my notes.

Which I then expanded as a set of sub questions to explore this question:

This is not a complete scope expansion for the command and attributes I’ve learned about, but this is a set of questions that I can ask of the application as ’tests’.

I gain more information about the application and learn stuff, and cover some command and data scope as I do so.

10 minutes later I start ’testing’ by asking these questions to the application.

Almost immediately my ‘plan’ of ‘work through the questions and learn stuff’ goes awry.

I chose ‘app’ as a ‘wrong command’ instead of ‘add’. but the application prompts me that it will modify all tasks. I didn’t expect that. So I have to think:

I conduct some more testing using the questions, and add the answers to my notes.

I also learn about the ‘modify’ command.

I can see that I stop my learning session at that point - it coincidentally happens to be 90 mins. Not by design. Just, that seemed to be the right amount of time for a focused test learning session.

I break and reflect

When I come back from my break, I reflect on what I’ve done and decide on an approach to ask questions of:

These questions lead me to read the documentation a little more. And I discover how to show the internal data from the system using the ‘info’ command. I also learn how to see ‘deleted’ tasks and a little more about filtering.

Seeing the data returned by ‘info’ makes me wonder if I can ‘modify’ the data shown there.

I already know that I can delete a task with the delete command. But perhaps I can modify the ‘status’ and create a ‘deleted’ task that way?

And I start to explore the modify command using the attributes that are shown to me, by the application. (you can see more detail in the report)

And I can ‘delete’ a task using the modify, but it does not exercise the full workflow i.e. the task is still in the pending file until I issue a ‘report’.

My model of the application changes:

At this point, I start to observe unexpected side-effects in the files. And I find a bug where I can create a blank undo record that I can’t undo (we demonstrate this in the webinar).

This is my first ‘bug’ and it is a direct result of observing a level lower than the GUI, i.e. at a technical level.

So I wonder if I can modify those?

The system allows me to modify them, and add them to the persistence mechanism, but ignores them for the internal model.

This doesn’t seem like a major bug, but I believe it to be a bug since other attributes I try to modify, which do not exist in the internal model e.g. ’newAttrib’ and ‘bob’ are not accepted by the modify command, but ‘id’ and ‘urgency’ are.

I start exploring the ’entry’ value

The ’entry’ value is the date the task was entered. This is automatically added:

So I start to experiment.

I might expect this with a ‘due’ date. But not a ’task creation date’ i.e. I know about this task but it hasn’t been created yet.

I then check if this actually matters. i.e. if tasks that didn’t officially exist yet are always less urgent than tasks that do, then it probably didn’t matter.

Follow on questions that I didn’t pursue would then relate to other attributes on the task:

Since I was following a defect seam, I didn’t think about this at the time.

And that’s why we review our testing. As I’m doing now. To reflect on what I did, and identify new ways of using the information that I found.

I’d been testing for a while, so I wanted a ’lighter’ approach.

I decided to see if I could create a recurring task, that recurred so quickly, that it would generate lots of data for me.

Recurring tasks are typically, weekly or daily. But what if a task repeated every second? in a minute I could create 60 and have more data to play with.

I could probably amend the text files, but I might introduce a referential integrity or data error. I really wanted to use the system to ‘fix’ this.

Eventually I turned to the ‘modify’ command. If I can’t mark the task as ‘deleted’ using the ‘delete’ command. Perhaps I can bypass the controls and modify it to ‘status:deleted’

And I did. So a ‘bug’ that I identify about bypassing controls, was actually useful for my testing. Perhaps the ‘modify’ command is working as expected and is actually for admins etc.

I decided to finish my day by looking at my logs.

Which was one of the questions I identify in my ’tool setup session’ but decided I had a ‘good enough’ approach to start.

And now, having added some value with testing, and learning even more about what I need the tooling to support. I thought I could justify some time to improve my tooling.

I had a quick search, experimented with the ‘script’ command, but eventually found that using a different terminal which logged input and output would give me an eve better ‘good enough’ environment.

We held the Black Ops Testing Webinar and discussed our testing, where I learned some approaches from the rest of the team.

I released my test notes to the wild on github.

This blog post represents my more detailed reflection on what I did.

This reflection was not for the purpose of scope expansion, clearly I could do ‘more’ testing around the areas I mentioned in my notes.

This reflection was for the purpose of thinking through my thinking, and trying to communicate it to others as well as myself. Because it is all very well seeing what I did, with the notes. And seeing the questions that I wrote allows you to build a model of my test thinking. But a meta reflection on my notes seemed like a useful activity to pursue.

If you notice any principles of approaches in my notes that I didn’t document here, then please let me know in the comments.