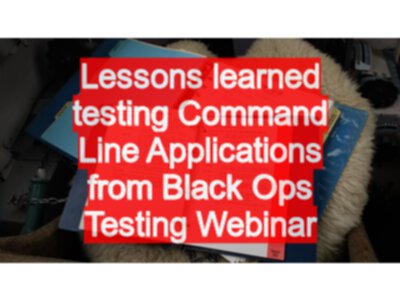 For the Black Ops Testing Webinar on 22nd September 2014 we were testing Taskwarrior, a CLI application.

I test a lot of Web software, hence the “Technical Web Testing 101” course, but this was a CLI application so I needed to get my Unix skills up to date again, and figure out what supporting infrastructure I needed.

By the way, you can see the full list of notes I made at github. In this post I’m going to explain the thought process a little more.

Before I started testing I wanted to make sure I could meet my ’technical testing’ needs:

And now I’ll explain how I met those needs… and the principles the process served. 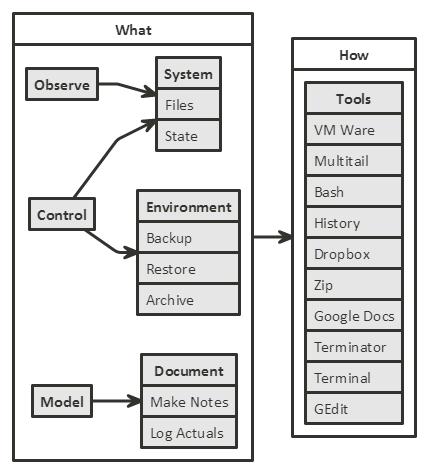 You will also find here a real life exploratory testing log that I wrote as I tested.

Part of my Technical Testing approach requires me to have the ability to Observe the system that I test.

With the web this is easy, I use proxies and developer tools.

How to do this with a CLI app? Well in this case Taskwarrior is file based. So I hunted around for some file monitoring tools.

I already knew about Multitail, so that was my default. ‘Tail’ allows you to monitor the changes to the end of a file. Multitail allows me to ’tail’ multiple files in the same window.

I looked around for other file monitoring tools, but couldn’t really find any.

I knew that the files would grow larger than tail could display, so I really wanted a way to view the files.

James Lyndsay used Textmate to see the files changing. I didn’t have time to look around for an editor that would do that (and I didn’t know James was using Textmate because we test in isolation and debrief later so we can all learn from each other and ask questions).

So I used gedit. The out of the box editing tool on Linux Ubuntu. This will reload the file if it has changed on the disk when I change tabs. And since I was monitoring the files using Multitail, I knew when to change tabs.

OK, so I’m ‘good’ on the monitoring front.

Next thing I want the ability to do? Reset my environment to a clean state.

With Taskwarrior that simply involves deleting the data files:

Restore the App to known states

OK. So now I want the ability to backup my data, and restore it.

I found a backup link on the Taskwarrior site. But I wanted to zip up the files rather than tar them, simply because it made it easier to work cross platform.

The above zips up, recursively, a directory. I used recursive add, just in case Taskwarrior changed its file setup as I tested. Because my analysis of how it stored the data was based on an initial ‘add a few tasks’ usage I could not count on it remaining true for the life of the application usage. Perhaps as I do more complicated tasks it would change? I didn’t know, so using a ‘recursive add’ gave me a safety net.

Same as the Multitail command, which will automatically add any new files it finds in the directory, so it added a history file after I started monitoring.

I would do most of my testing in a VM, and I really wanted the files to exist on my main machine because I have all the tools I need to edit and process them there. And rather than messing about with a version control system or shared folders between VM etc.

I decided the fastest way of connecting my machines was by using Dropbox. So I backup the data and my logs to Dropbox on the VM and it automatically syncs to all my other machines, including my desktop.

I had in the back of my mind that I could probably use the history function in Bash to help me track my testing.

I wanted to use the log as my ’these are the actual commands I typed in over this period of time.
So I had to figure out how to add time stamps to the history log

I added ‘comments’ to the history using the ‘echo’ command, which displays the text on screen and appears in the history as an obviously non-testing command.

I also found with history:

All my notes are in the full testing notes I made.

I could have gone further:

But I had done enough to meet my basic needs for Observation, Manipulation and Reporting.
Oh, and I decided on a Google doc for my test notes very early on, because, again, that would be real time accessible from all the machines I was working from. I exported a pdf of the docs to the gihub repo.

And what about the testing?

Yeah, I did some testing as well. You can see the notes I made for the testing in the github repo.

So how did the tools help?

As I was testing, I was able to observe the system as I entered commands.

As I explored, I was able to see ‘strange’ data in the undo.data file that I would have missed had I not had visibility into the system.

You are able to view the data if you want, because I backed up up as I went along, and it automatically saved to dropbox, which I later committed to github.

At the end of the day, I spent a little time on the additional tooling tasks I had noted earlier.

I looked at the ‘script’ command which allows you to record your input and output to a file, but since it had all the display esc characters in it, it wasn’t particularly useful for reviewing.

Then I thought I’d see what alternative terminal tools might be useful.

I initially thought of Terminator, since I’ve used it before. And when I tried it, I noticed the logger plug-in, which would have been perfect, had I had that at the start of my testing since the output is human readable and captures the command input and the system output as you test. You can see an example of the output in the github repo.

I would want to change the bash prompt so that it had the date time in it though so the log was more self documenting.

You can see the change in my environment in the two screenshots I captured.

And as I look over the preceding information I can pull out some principles that underpin what I do.

You might identify other principles in this text. If you do, please leave a comment and let me know.

Why didn’t you use tool X?

If you have particular tools that you prefer to use when testing CLI applications then please leave a comment so I can learn from your experience.