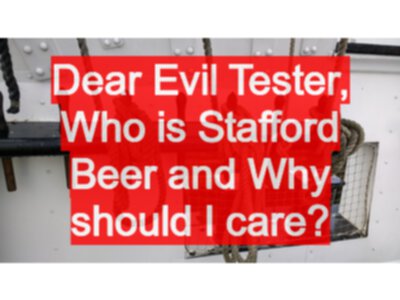 Dear Evil Tester, Who is Stafford Beer and Why should I care?

Question: Who is Stafford Beer and Why should I care?

I’m reading your post about the word “automation” and why we should stop using it. Cool stuff so thanks for that.

My question is twofold:

Answer: Because he was splendid!

Dear Vernon,
Thanks for asking.

1) Why do you rate Stafford Beer?

I like Stafford Beer’s sense of humour. How often are management books entertaining? Also they are very deep and require study. His books were written prior to the current management book vogue of having a single point and then padding it out with ‘stories’.

And how many management theorists also incorporate their art and poetry into their work? Buckminster Fuller and Stafford Beer - I can’t think of many others.

I like the way we get to see his models and explanations develop over time. Although people seem to think that Cybernetics died off, I think we see a progression and development through Stafford Beer’s work and changing as computers grew ever more powerful.

But Stafford Beer’s work always seemed to be about how can we better organise systems to support the necessary communication flows within them. And since he had an early, and ongoing, factory/management background, his work is very grounded in how organizations and teams work. So I can generalise his approaches and adopt a similar modeling style for the various places that I work in.

Also, I think it was from Stafford Beer that I learned about Attenuation and Amplification in terms of Human Communication, rather than in an electrical context that we might normally associate with Cybernetics.

We might standardise reporting to attenuate away detailed information that might distract communication, but we also lose nuances, and if there are no other communication lines in place, those signals might get lost. And overtime the standardisation may cease to be fit for purpose, but may not be revisited. Standardised Metrics that are no use to anyone. Risk and issue logs that are never reviewed. So compensatory processes like team based retrospectives can be used to pick up on the signals that would otherwise be lost, and acted upon in a local system rather than feeding through into the surrounding systems.

Certainly I took from Stafford Beer an approach of modeling systems within systems of overlapping systems and viewing them in different ways to attenuate the overlaps.

When I build and adapt test processes I’m very conscious of attenuation and amplification. And as a manager I make sure that I can amplify any signals that are lost via the standard attenuation communication processes, and try very hard to pick up on important weak signals before they amplify.

Stafford Beer was around when Operational Research was being used in the war, and for statistical control of processes. Stafford Beer worked in industry and so was conscious of customer satisfaction, viability and money. His work always seems practical to me.

I don’t always ‘get’ Stafford Beer on first reading. And I probably still haven’t ‘got’ him now. But I re-read his work and learn more each time.

If I was to start with Stafford Beer, I’d read whichever books I could get cheaply enough as they are all useful. But in terms of ’least scary to start with’ I would specifically try and track down:

You can find some Stafford Beer lectures on youtube if you’d prefer a cheaper and less forbidding start [https://www.google.co.uk/search?q=stafford+beer+youtube]

2) Where/how do you find these books?

I don’t remember how I first found Stafford Beer. I think it was in a reference in some other book. Although the first Stafford Beer book I bought “How many grapes went into the wine” I bought in a sale because it looked interesting. But didn’t realise it was a Stafford Beer book until I had tracked down “Designing Freedom” and “Diagnosing the System for Organizations”. Two very slim but very deep books.

…I’m wondering how you wander across them.

Much like a character from an H.P. Lovecraft novel, I would hunt down “strange, rare books on forbidden subjects”. Books that are hinted at in the marginalia of less strange and less rare books on less forbidden subjects. I would constantly trawl second hand book shop after second hand book shop trusting to the Gods of coincidence and lucky chance. And there I would select random books and perform stichomancy to identify my next area of study.

But nowadays I tend to search on ebay and look up references in archive.org.

I no longer have an ebay search active for Stafford Beer, but when I was trying to source the books I primarily used ebay and abebooks. Also sometimes you get lucky with second hand sellers on Amazon.

Adopt A Reading Strategy of ‘Go to the source’

One of my study and reading strategies is to ‘go to the source’.

When I read a book that someone has recommended to me, or that I found useful. I’ll look at what books the writer of that book referred to and try and find out who that writer studied. And then track down the books that they read and used.

That way I’ll gain a different perspective on the original work, rather than a single writers interpretation of their work. It also takes me back to books that fewer people have read, which helps me have a different approach. Over time that has led me to many interesting authors that I would probably not have otherwise read.

And many of these books are old. So they are available at archive.org, or at Project Gutenberg, which can be helpful as sellers of second hand copies of some of these books seem to put a price value higher than I want to pay.

For your delight and delectation, I have attached a picture of my Stafford Beer stash. 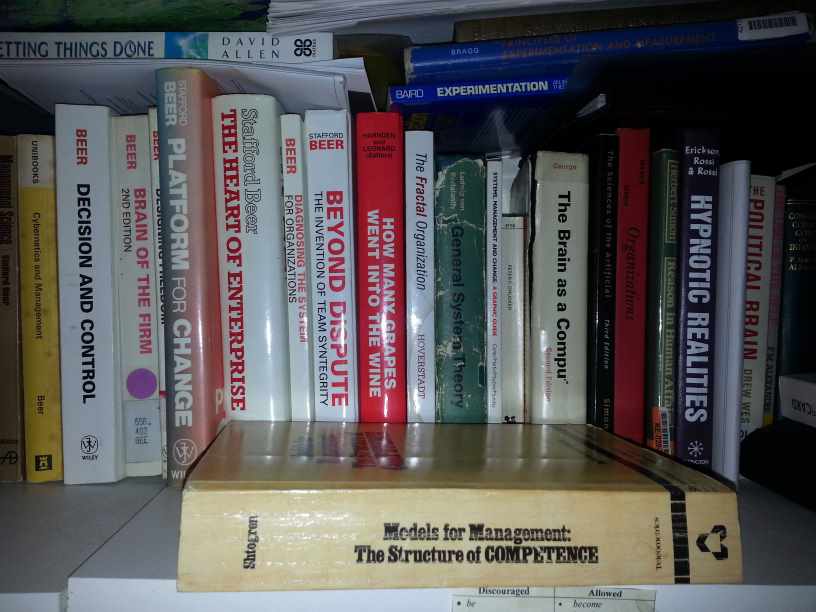 << Technical Testing with MS Edge and "the user will never do that"
I did not know Firefox could do that: Syntax Error Highlighting in "View Page Source" >>