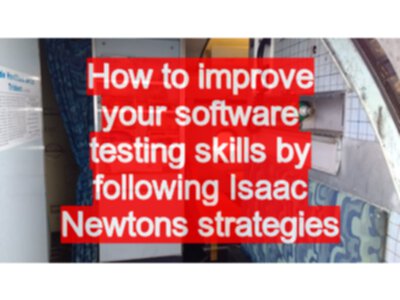 How to improve your software testing skills, by following these strategies, that’s how. Based on a quick book recommendation - Isaac Newton by James Gleick I want to explain how we can learn lessons from his approach to his work and career.

For the longest time, Isaac Newton didn’t publish - he produced a mountain of notes and written work throughout his life but much of it has not been published.

When he did publish it was at the behest of people wanting to learn, because he had worked out information that they need to move forward.

Isaac Newton eventually published some his work and was criticised, accused of plagiarism and told it was of no value and wrong. This put him off publishing for some time, he only later published when he learned that people were putting out work that he had already ‘discovered’ and had covered in more depth.

Don’t be put off publishing because of the potential for negative feedback or responses.

Isaac Newton worked on his own, a lot. He was able to work on his own because he was building on earlier work on math, philosophy and alchemy: studying it in depth and building on it with objective critical thinking. And the key to his success, given that he worked in isolation, was objective critical thinking, if we can learn to do that then we can grow from analysis of our own experience.

When Isaac Newton did publish later, people were able to build on it and use him as an exemplar practitioner whose work they could aspire to achieve or better.

Recently I’ve been following the work of the following practitioners on GitHub because they are leaving a trail of evidence that I can learn from: Bas Djikstra, Mark Winteringham, Angie Jones, TJ Maher

I’m sure there are plenty of other practioner’s who’s work I should be studying but am not aware of. And there are many I am aware of but have not mentioned here: I do have a newsfeed that monitors 931 blogs across a range of topics but I couldn’t list all of that. or them, here. If you know of any people you study then please leave a comment so we can all learn.

I like to find practitioners who are leaving a trail of ‘working’, not just explained results, but processes, code, ‘doing’ videos, case studies. I think this add longer term study value than an outcome report.

And study their work because they may be working at an aspirational level - a level of competence that you have not yet achieved, but they demonstrate the possibility of achievement and you can learn from them to build the skill to do what they do, or take a different implementation path after learning from their experience (a path you then document for future practitioners).

One thing I found particularly interesting about Isaac Newton was that he studied and practiced Alchemy as well as extensive exegesis on Biblical texts. He was looking for patterns, predictions and missing or obfuscated truth, that he could then apply. I haven’t read a detailed publication covering Newton’s Alchemical work, but I’d like to. I imagine that his experimentation heavily influenced his scientific work. But the key for me is that we should study subjects that we are interested in.

Not necessarily the subjects that everyone else studies. Study the stuff that resonates with you, and pull the experiences and skills from that study into your testing. You will spend a lot more time studying testing when you do that. Newton kept his notes and writings on his ‘secret’ studies secret, he made a massive impact with his mainstream work. Perhaps your secret studies will inform your mainstream work in ways you can’t possibly yet imagine.

People mentioned in this article and the video:

<< Implementing PATCH Verbs with Gson Jaxb and Spark Framework
Are you stable, or complacent? Is it time to experiment yet? >>