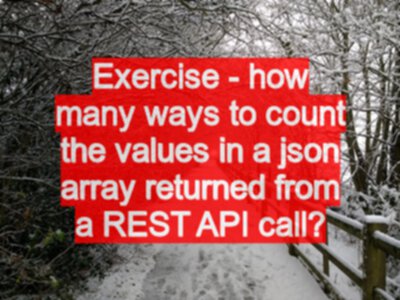 Exercise - how many ways to count the values in a json array returned from a REST API call?

TLDR: When we use multiple tools and existing tool features, we open up new options in how we approach our testing. This can help us identify workarounds when we identify testability feature requests, and might even remove the need for the testability feature.

I set myself a Practice Test Exercise. You might want to try it yourself before reading the full text of this post.

To take part you’ll need to:

I used Thingifier, created a bunch of ’todos’ and then used GET /todos to return an array of ’todos'

I eventually came up with six different ways to count the number in the array before I stopped.

I learned some new stuff along the way, and remembered some old stuff. I found this a useful exercise.

If you identify other ways to count the JSON than I did, then I’d be interested in learning so send me a message or leave a comment somewhere.

Roots of the Exercise

Elisabeth Hocke and Thomas Rinke bravely picked the app to perform some testing on, and created a useful write up.

One note in the write up mentioned that it could be useful if the responses described how many items were returned.

e.g. GET /todos returns a list of todos, but if there are a lot of them then it can be hard to know how many are there.

Elisabeth and Thomas were using Postman to test the app, and Postman does not show how many items are returned.

I wrote some comments to Elisabeth and Thomas, and at the time the only ‘workaround’ I could think of was to use Insomnia, because that can show a filter count in the responses.

I suggested this because:

But my only option made me realise that I didn’t have enough workarounds available in my mind to handle this situation.

I used this limitation as a Personal Test Improvement Exercise.

Here’s the exercise I set myself:

How many ways to count the values in a json array returned from a REST API call?

I found six ways before I stopped.

We don’t have to stick to one tool. Insomnia is a REST Client that I often use for Exploratory testing.

It has a handy filter facility in the Response, which I can use to show the number of todos returned.

In Postman show the console with “View \ Show Postman Console”

Then use the pretty print view to see how many items are in the JSON array.

Starts at 0 so when it shows 201 at the bottom it means there are 202 todos in the returned array.

Script in Tests in a request in Postman

I can write any arbitrary code I want in the Postman ‘Tests’ or ‘Pre-request Script’ and I can use that to support my testing, not just assert on values.

e.g. the code below parses the response and logs to the Postman Dev console the number of items returned in the ’todos’ array in the response.

There are many ways to hack this in Postman: in the request, at a folder level, at a collection level, or possibly re-using a script created by a collection. But basically - view the ‘Tests’ functionality as ‘Code to run after request is completed’ functionality.

Paste the JSON into a browser dev console

Paste directly and you might see the result output:

or paste it into a variable e.g.

Paste it into an online JSON viewer

Send Requests/Response through a Proxy and use the Proxy viewer

I configured Insomnia to route through Charles proxy and used the Charles JSON view to show the number of items in the array. Other proxies have similar functionality.

This was triggered by the very useful work that Elisabeth Hocke and Thomas Rinke describe in their write up.

I wanted to expand the options available to me when testing.