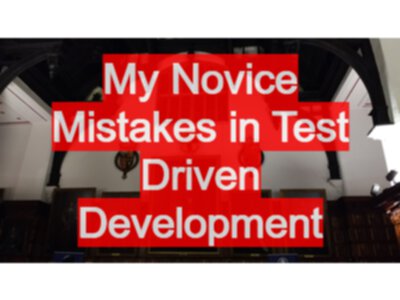 Since I generally present myself as a tester, coupled with my relatively novice status when coding in Java using TDD. I don’t mind writing up my TDD mistakes here.

My basic set of mistakes

The basic set of mistakes I have made recently consists of:

So those mistakes in more detail:

I don’t know why I kept forgetting this. Every time I created a java class I would start it with a lower case letter. For some reason I used lowerCamelCase instead of WikiCase.

But, really the reasons mean nothing. We only get points for getting rid of the habit.

Doing refactoring when I don’t

I get full points for:

And then I hit ‘refactor’.

I thought I refactored, but instead I ‘rewrote’. I introduced new lines of code which I did not drive with tests and which the original tests did not cover. And I introduced new bugs as a result - even though the old tests passed.

I did not refactor, and those new lines of code should have meant new tests.

Not checking my code coverage

Some of the additional lines of code resulted from my rewrite ‘refactoring’. And some of it because I had test driven my code with higher level acceptance tests, and then forgotten to drop down to TDD my class level code.

By reading the results of my code coverage I could spot tests that I had missed out. Which I would not have done, had I done TDD better.

Not doing a review step

TDD demands intense focus (at least it does for me) and at the end of a session when I have my code and my tests pass and I’ve ‘really’ refactored. I find it so tempting to just hit the ‘done’ button.

I should have reviewed. I should have stepped back and gone ok, so I’ve met the acceptance criteria, but maybe I need some unit tests.

As a tester, I think about those things when I review stories. Exactly those kind of things. I did not manage to swap well between test and developer modes when learning TDD.

Not doing an update after a commit

A killer mistake if you work in a team environment. Stick your code into the repository but then not get the changes that other people have made.

My Excuse? I do most of my coding at home on my own so I don’t normally have to do this step.

I got lucky lucky lucky. I wasn’t pairing at the time, but my pair spotted it during our next pairing session.

In the next exciting episode…

I will describe my approach to tracking mistakes and what I’ve done about them.