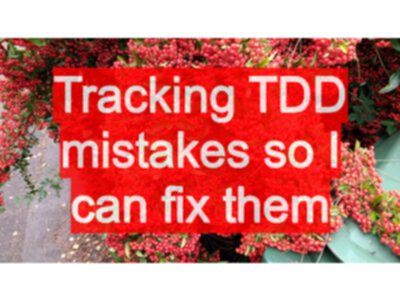 Tracking TDD mistakes so I can fix them

Previously I made some TDD mistakes. So to fix them. I tracked them.

I tracked the mistakes by creating an index card that listed the ‘bad’ things on one side, and the ‘good’ things on the other side. Then noted when I did the bad things, and when I did the good things. The writing of these statements seems important. So if we have a look at the card… 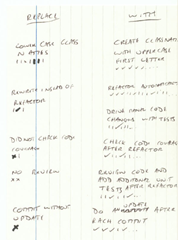 I write the ‘bad’ things in the leftmost Column “Replace”.

And the ‘good’ things in the rightmost column title “With”.

The act of marking when you do them becomes so annoying and embarrassing that you really do build the motivation to stop.

Those that particularly annoyed me I put a big X against or started using a bigger pen.

The hardest part of this process becomes maintaining the discipline to mark down when you did or did not do something as this type of reflective behaviour takes practice to build up.

By taking notes of what I did ‘wrong’, and ‘right’. I feel that I have managed to build up a reflective style of working. And I do feel that this has also had a good knock on effect on my exploratory testing note taking.

But note the important points about the “With” column phrasing:

By, write behaviour with a positive intent I mean phrase it in terms of what you want to do, instead of what you don’t so instead of “Stop committing without an update” write “Do an update after each commit”.

When I think I finally got it, I added a … in the with column. If I make the mistake again then I’ll start a new card with the old behaviours and the new behaviours, and I’ll date the old card.