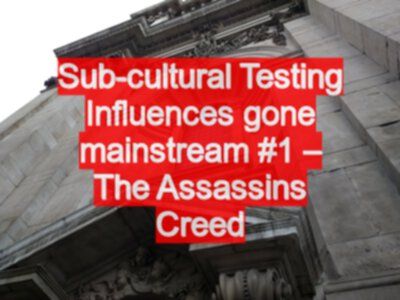 My testing style, attitude and approach has had many influences. I only recently realised that one of them has become very mainstream.

“nothing is true, everything is permitted”

Words attributed to Hassan-i-Sabbah on his death bed. Specifically ambiguous and open to misuse. Perfect for testing.

This went all mainstream with the “Assassin’s Creed” game series

Fortunately when dealing with software systems, many of the moral dimensions of the Assassin’s phrase disappear and we no longer have to engage in the philosophical debate about boundaries of human actions. We just get on with the testing.

Objections such as “No user would ever do that” have no stopping power on the Assassin influenced tester.

This phrase helped me through some difficult and turbulent waterfall testing times.

Try it on and see how it fits your testing style.