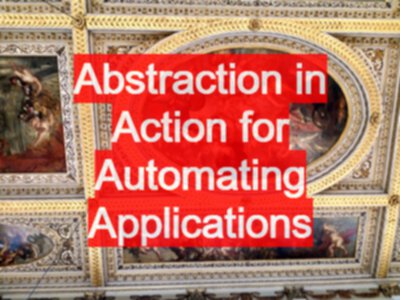 Abstraction in Action for Automating Applications

The August 2012 edition of Professional Tester contains an article I wrote to help promote the Eurostar 2012 conference and my WebDriver tutorial at the conference. The article was entitled “Abstraction in Action” and it provides a brief overview of some automation code abstraction principles and models.

It’s useful to adopt different views of test automation. For example viewing it as a programming activity has forced me to improve my knowledge of coding styles, patterns and libraries. Viewing it as a way to increase coverage of data, requirements and other realities has led me to learn test driven development which in turn has helped me learn to write better test code.

But I view test automation primarily as a modelling process. This view has allowed me to learn to architect better test frameworks and expand use of test automation by using the same framework for multiple test objectives and types. Here are some examples showing how, using Java, JUnit, WebDriver and the simple calculator application at https://testpages.herokuapp.com/styled/calculator

All the code quoted is available:

All the books referenced are published by Addison-Wesley.

Consider the simple test script shown below. It models the behaviour of a user. Its goal is described by the test method name “canAddTwoNumbers”.

The page object model (POM) is a physical model in which the abstractions exist at the page level rather than the browser/DOM level as provided by WebDriver. The code below shows an initial page object for the calculator.

Using the POM allows me to model at a higher level, working with a functional model of the page as the main object. The script still models the physical world, but has moved closer to modelling user interactions with functionality rather than layout. As shown below:

All I have done so far is refactor to methods using an existing coding pattern. If you are not familiar with this concept, I recommend Martin Fowler’s book Refactoring: Improving the Design of Existing Code (ISBN 9780201485677).

The test automation specialists with whom I work on projects are usually very good at coding, refactoring and using patterns. But to what to refactor and what patterns to use are modelling decisions, and these are hard. For example, I made here a modelling decision not to move the “driver.navigate().to(…)” code into the page object.

I could have, easily. The page object pattern is pretty non-specific. Navigation seems like a page detail, ie where the page is located. It would have made the test script code neater since I could have modelled the navigation in my test as “calculatorPage.visit()”.

Instead I decided to model the concept of navigation separately from the page functionality. I decided that I did not (yet) need to build an abstraction on top of the existing WebDriver abstraction to perform navigation. The more tests I build using the abstraction layers, the more I will be forced to revisit my modelling decisions.

There are a lot of nuances in modelling: I particularly like Michael Jackson’s exploration of the topic in his books Software Requirements and Specifications (ISBN 9780201877120) and Problem Frames and Methods (ISBN 9780201596274). However I use a very basic set of model partitions: logical and physical. I see a lot of test automation that involves physical models and abstractions of the physical domain but far less around the logical domain.

I could continue to focus my model refinement at the test script level. For example I might decide that I want to model my test script as shown below. Supporting this does not require much of a programming change: simply have the methods return the CalculatorPage object to support method chaining, and introduce two methods for syntactic sugar (then & and). This might make the test script much more readable.

I could also make the calculate() method return the answer value: after all calculate() typically returns a value. That would make the test look as shown below.

Whether or not to do this is a modelling decision, ie it is based on how we want our tests to look and under what circumstances we want to reuse the abstractions. Is it a good idea? I think not, and that I thought of it because I didn’t model the page object correctly in the first place. I named the calculate() method incorrectly: it does not calculate, it clicks the “Calculate” button. I mixed a ’logical’ model concept (calculate) into a ‘physical’ model (click button). If I had named the method clickCalculateButton() then I wouldn’t have started thinking about changing the test.

When modelling we have to be very clear about what our abstractions are for, what their purpose is, and what the limits of their responsibility are. When we let our abstractions leak, we can make it harder to decide where we should refactor code to, and increase maintenance overhead.

However, returning a value from the abstraction layer in the test does seem like a good idea. So how might I model that?

The logical domain can be modelled in terms of a “calculator” and a “calculation”, as in the model as shown below. With this approach I’m no longer modelling the low-level functional details: I’m starting to model the high-level functionality.

To make the test code cleaner I have instantiated the physical abstractions for the driver in the @BeforeClass and tidy up in the @AfterClass. This keeps the test as clean as I can get it, without further refactoring.

Note that the test has changed in that the data is now represented using domain concepts. The numbers and answer are no longer strings but Java numeric primitives. The function is now a string with a mathematical operator because this is more in keeping with the domain with which this level of abstraction deals.

The transformation from “+” to “plus” is done by the calculator’s calculate method because this method is helping me bridge the gap between the logical and physical models. The implementation that sits behind this reuses the physical abstractions already built.

Anand Ramdeo explained many of the practicalities associated with refactoring to abstraction layers at the Selenium Conference earlier this year. His presentation can be seen at

Modelling in the logical domain tends to lead to tests whose expected outcome involves the SUT performing its purpose (sometimes called “positive tests”). In this example, using the logical abstractions helps with thinking about and choosing valid input values to test the accuracy of the calculator. Using the physical abstractions does the same for “negative tests”, in this case those whose expected outcome is that no calculation occurs because the input is invalid: eg “2” “plus” “five”.

Using more abstraction layers makes it easier to reuse test code for exploratory testing, especially when they are “clean”, that is they do not bleed responsibilities into one another. I tend to use logical layers to explore behavior under “normal use”, for example to randomize input combinations or for ad hoc performance testing, and drop down to physical layers to explore exploitation and exception scenarios.

Development and testing require very different mindsets. The best developers and the best testers are those allowed to remain within one or the other of them for long periods: that is, specialists. Yet a tester creating automated tests is required to switch between them frequently because any executable automated test requires setup code. Abstraction helps by creating a clear distinction between writing code intended to function as intended without incident and code that has potential to detect defects.

If the physical abstraction layers are correct, correct logical domain tests should not fail. Learning to model domains makes the tester able to make many useful assertions like these.

I recommend Domain-driven Design: Tackling Complexity in the Heart of Software by Eric Evans (ISBN 9780321125217).

Abstraction and the simplicity it enables are valuable to developers. They are enormously more valuable to testers and the acquirers and users we serve. I learned their value and how to achieve them especially from Implementation Patterns by Kent Beck (ISBN 9780321413093) and Growing Object-Oriented Software, Guided by Tests by Steve Freeman and Nat Pryce (ISBN 9780321503626).

Code intended for production should be transparently readable. So should test code, for exactly the same reasons. From a development perspective, quality of production code is more important than quality of test code. Objectively the opposite is true.

This sets a challenge for testers. Our code must be as good as production code. We must aim to become better programmers than the developers whose code we test. This does not mean a change of mindset on either side. Developers must code well with a development mindset while testers code better with a testing mindset. Abstraction makes that achievable. But if you are good at modelling (which most testers are instinctively) but not at programming, you limit the ways your test framework can grow.

As a tester striving to become a better programmer in order to test better I have learned a lot of lessons and many of those which have helped me most are listed by Naresh Jain at http://blogs.agilefaqs.com/ 2012/06/07/oo-design-principles retrieved 1st July 2012 0001 UTC. Testers should consider especially “don’t repeat yourself”, “tell don’t ask” and the “dependency inversion principle”.

The purpose of abstracting is not to be vague, but to create a a new semantic level in which one can be absolutely precise (Edsger W. Dijkstra in his Association for Computing Machinery Turing Lecture 1972: see http://cs.utexas.edu/~EWD/ewd03xx/EWD340.PDF retrieved 1st July 2012 0002 UTC). The test programmer views test tools as abstraction layers to support the modelling done to design tests and understands exactly what each does. For example WebDriver abstracts the physical interaction with the browser and the DOM; FitNesse and Cucumber abstract the mechanism of parsing a DSL making data-driven testing easier. This approach avoids dependence upon specific tools so that the abstraction layers can be changed as understanding of the SUT and how to test it increases.

Since this article was written, I have now created a full course on abstraction layers: