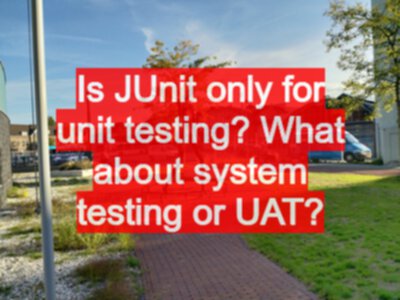 Is JUnit only for unit testing? What about system testing or UAT?

TLDR; We can use JUnit to execute code to support any type of testing.

Q: Is JUnit just for Unit Testing or can we use it for other testing as well? from Alan Richardson on Vimeo.

I don’t think of JUnit as a Unit Testing Tool. Instead, I view it as a way of running code marked as ‘runnable by JUnit’. That code is marked by @Test annotations and is often called a Test, and those ‘Tests’ are often used for Unit testing, but they don’t have to be.

JUnit can be used as a test runner for any kind of test: e.g. system and integration tests; tests which are interacting with a deployed application.

e.g. the WebDriver tests here all use JUnit github.com/eviltester/webDriverExperiments and they interact with an application which runs in a browser.

And you can see me use JUnit it here to aid my interactive exploratory and system testing of an API:

The name JUnit should not lead you to think that it is only for Unit testing.

If you want to automate, from code, then you’ll need some way of executing the code. In the book we use JUnit as Test Runner to execute code.

I see a lot of examples of “how to learn Java” which use ‘main’ methods to allow execution of the code.

‘main’ methods are a good approach if you want to compile your code into an application.

Unfortunately I’ve seen that when people learn to write Java this way, they often have multiple ‘main’ methods in their code, without really knowing why a ‘main’ method is are used. And they don’t learn any strategies for running bits of code in an adhoc fashion, as well as a strategic fashion.

In the book “Java For Testers” I wanted people to learn Test Driven Development, but not make it a ’thing’ just a natural process, so all the execution capabilities of the code are provided by @Test annotation, and executed from JUnit. This allows us to:

Hopefully as you work through the book that will all become clearer.

If you want to automate, you will need to write code, and you’ll want to unit test that code as well, and you’ll use JUnit for that, as well as using JUnit to provide the ability to execute your code.

P.S. I think you are unlikely to strategically automate as part of a UAT process. But you might tactically automate (adhoc) data setup and configuration, and you’ll need coding skills to do that effectively.

<< We test REST even if it isn't REST
Question: What is the best Page Object framework for Java? >>