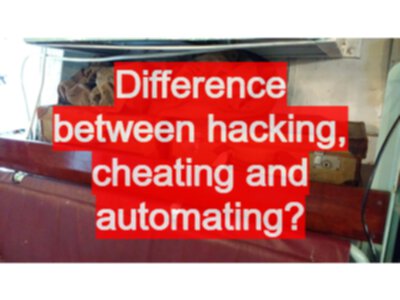 Difference between hacking, cheating and automating? 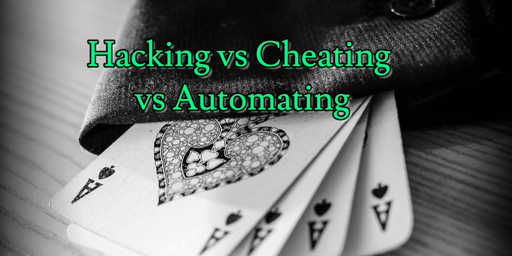 My bot cheated and automated shooting, I hacked

The bot has been through a few iterations:

The different versions represent ‘cheating’ or ‘automating’.
I had to ‘hack’ to get the information I needed to ‘cheat’ with bot zero.

Bot zero is essentially a cheat bot. It breaks the rules of the game to get ahead. The game only ever allows 3 EMP devices, so I ‘cheated’ when my bot used an EMP device and then generated a new one.

I also had to ‘hack’ to build the information I needed to automate.

Bots 1-6 are where the automating steps in.

I’m using the game interface code as the entry point. Rather than amending internal model state, I use the functions that would be called by keyboard events. All I’m really doing is bypassing the keyboard and triggering the game events very quickly.

I do cheat when I’m testing.

All to achieve my aims.

But with ‘cheating’ comes ‘more risk’.

This might be worth the risk, and might expose a valid problem that would be very hard to surface in any other way.

Some of the cheat’s are less risky e.g. amending a message. This is easier to justify because, in theory, if it is a Web application then any user can feed the communication traffic through a proxy and amend it. Malicious users, like hackers, certainly would, and if the ‘cheat’ exposes a vulnerability then it is easier to justify. Really I’m using the external interface, I’m just triggering messages that the GUI would never send.

When we use the external interfaces it is much harder to discount what we are doing.

They have the advantages that:

I can’t imagine a user reaching wave 95 in ZType. In essence we performed a ‘stress’ test on the application and it performed without any execution issues.