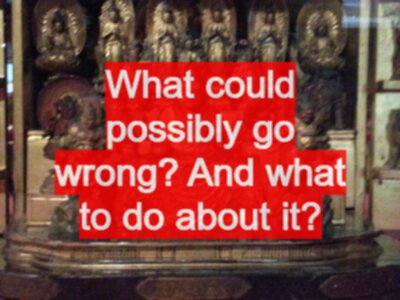 What could possibly go wrong? And what to do about it?

TLDR; We test based on risk. If we don’t identify risk we don’t test for it. Automated tools can reveal risk that our technical knowledge can not. 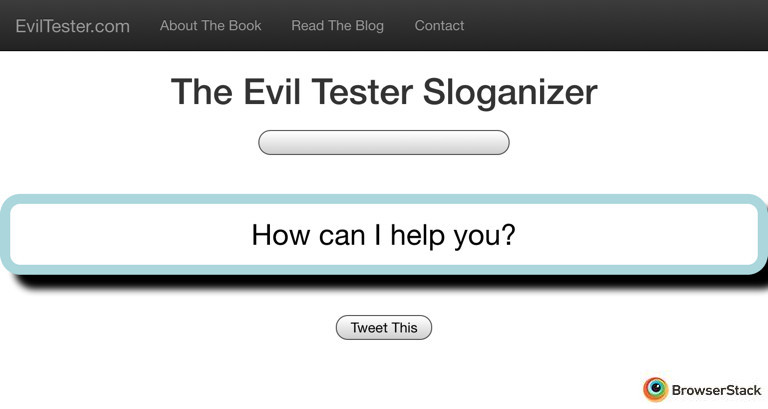 A timeline of a true story of software development:

Did you even test it?

What testing did you actually do?

But hey, come on. Look at the app ("The Evil Tester Sloganizer"), it was just a ‘fun thing’.

Look at the app from a technical risk perspective

Yes. Let’s look at the app.

So what could go wrong?

And what happens if the risks manifest?

Impact of JavaScript not working

Wait a minute. You didn’t say anything about the Tweet link earlier.

What did you do to minimise that risk?

innerHTML seems the most risky. I know we are supposed to use innerText on some browsers, but I’ll add some wrapper code that detects which method the element supports later.

And did you unit test your custom string formatting code?

Impact of HTML not working

If the HTML doesn’t work properly then the page might not render.

It does look simple.
Did it work?

@eviltester Is there a label missing from that button? pic.twitter.com/IkvnMf7J5d

@neilstudd @DannyDainton Cool. Seems they don't like an `h2` inside a `button` I have amended my html to use more css and less html

What did you do?

And why did you add the h2 in the first place?

Was it a heading?

And you didn’t find this in your testing?

So what could we do in the future?

That’s an option, but sounds expensive. What else?

That’s an option. But it only does screenshots, what if we want the page/app in a specific state and view that state.

Or a test harness that renders the app in that state using the same GUI code, remember we are only testing the GUI rendering by looking at screenshots, not the functionality, we don’t need the full app.

(Note: I was working just last a few weeks ago with a client where we did exactly this - created a harness, that rendered the GUI, using the ‘real’ code, but injected data and state, to allow responsive testing to be performed for visual rendering and support reviewing the rendering for issues via screenshots.)

OK. That might be bad then?
What are you going to do? Remember it is really a link. It doesn’t really ‘do’ something.

And you added the rel tag to prevent the opener.location exploit?

Did you read it?

So rather than ’testing’ we can pick some of these errors up with a linter or a validator prior to testing.

Impact of CSS not rendering properly

And if the CSS doesn’t work?

We decide on the testing that we perform based on the risk we identify and accept.

My Risk Analysis was wrong

As it turned out my HTML choices were high risk and triggered a cross platform issue, but I didn’t have enough technical knowledge of HTML to recognise that. Perhaps a more technically focused HTML developer would have seen that risk earlier and not have written code like that anyway.

If I relied on testing I could only find on real devices. Fortunately running this on a single iOS device would have found this - as Neil demonstrated with his use of BrowserStack Screenshots.

Even though I did a ’tiny’ amount of responsive manipulation I would never have found this through testing unless I used a real device.

But ’testing’ isn’t always the best way to find issues.

I didn’t use any validation tools

Make use of validation tools for automated feedback prior to testing.

In this case the W3 Validator would have provided actionable feedback. And now I believe that “Error” in the validator means - “some device is going to render this badly” I will act on errors (and probably warnings).

Validation tools can provide technical expertise that we might not have. and can point out risks that we have not identified.

Use of validation tools doesn’t mean that something won’t go wrong on devices you haven’t tested on, but it reduces the risk and you have less ’technical’ reason to test cross platform.

I did accept some risk

Be aware of the risks that you are accepting

I did not anticipate mobile issues so quickly

Because I hardly ever use Twitter on mobile. It never occurred to me that people following the link on mobile was a high risk.

But I’ve seen that before.

I should assume that pretty much everything linked to on twitter will be viewed on mobile.

I’ve been improving my web sites to make them more responsive because of this. And I’ve been extending my ‘responsive’ testing repertoire.

But ‘responsive’ doesn’t mean ’test cross device’, it means respond to certain attributes reported by the device, and you can simulate these attributes.

I need to derisk ‘cross device’ at a deeper technical level than I already do. Because this wasn’t a ‘responsive’ issue. This was an HTML issue.

While I am planning on putting this app on mobile, and I build it with that use case in mind. I didn’t think we would hit it so quickly.

We choose to go live

I didn’t choose to go live because:

I chose to go live because I thought it was ‘good enough’ and ’low risk enough’ and went with a ‘beta’ tag because I hoped for early feedback if something was wrong.

I chose to go live.

Projects choose to go live, unless they automate the ‘go live’ decisions as part of their automated workflow.
Thanks Neil and Danny for providing the early feedback on the app that led to this retrospective.

<< Dear Evil Tester: I think that if I 'learn automation' I can get a new job FAST
Batch validation of HTML as part of your web testing with Total Validator >>